Arsenal take on Tottenham in the North London Derby at the Emirates on Sunday afternoon. Here is the team Gooner Mac expects Mikel Arteta to select:

Arsenal take on Tottenham in the North London Derby at the Emirates on Sunday afternoon. Here is the team Gooner Mac expects Mikel Arteta to select:

Goalkeeper: Bernd Leno will once again start between the sticks for Arsenal so Mat Ryan will continue as the German’s No.2 on the bench.

Defence: Arteta could stick with the same back four that started during Arsenal’s 3-1 victory over Olympiacos on Thursday night. Cedric Soares is pushing for a recall but I think we’ll see Hector Bellerin and Kieran Tierney keeping their places in the full-back positions against Tottenham on Sunday.

There are plenty of options at centre-back as Pablo Mari, Rob Holding and Calum Chambers are all available if Arteta wants to freshen things up but I expect to see David Luiz keep his place while Gabriel should start after scoring a superb header on Thursday night.

Midfield: Thomas Partey was substituted midway through the second half of Arsenal’s Europa League win and Arteta described it as a ‘tactical’ decision rather than due to injury so he’ll be available this weekend.

Dani Ceballos was at fault for the Olympiacos goal and his form has really dipped lately so I don’t see him starting against Tottenham. Mo Elneny scored a lovely goal last night but I still think he’ll remain on the bench this weekend with Partey starting alongside Granit Xhaka.

Martin Odegaard opened his account for Arsenal with a stunning goal against Olympiacos but he’s played a lot of football lately so I wouldn’t be surprised to see him rested on Sunday with Emile Smith Rowe starting against Spurs.

Attack: Bukayo Saka should keep his place in attack so alongside Smith Rowe Arsenal will have two academy graduates aged 20 or under starting a NLD. Willian got another assist last night but I still think he’ll drop out with Nicolas Pepe recalled on the wing.

Pierre-Emerick Aubameyang should continue to lead the line up front with Alexandre Lacazette among the Arsenal subs while the out-of-favour Gabriel Martinelli will also have to settle for a place among the subs. 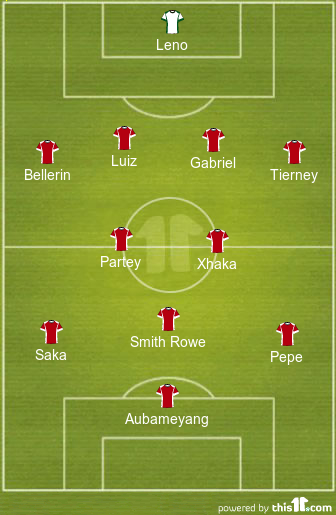