Chelsea take on Atletico Madrid in the Champions League on Wednesday night. Here is the team we expect Thomas Tuchel to select for the game:

Chelsea take on Atletico Madrid in the Champions League on Wednesday night. Here is the team we expect Thomas Tuchel to select for the game:

Goalkeeper: Chelsea’s number one goalkeeper Edouard Mendy will once again start between the sticks tomorrow night so Kepa Arrizabalaga will remain on the bench.

Defence: Thiago Silva suffered a set-back in his recovery from a thigh injury last week so the Brazilian defender is set to miss out against Atletico Madrid as he continues his rehabilitation.

Tuchel went with a back four during the 0-0 draw at Leeds United on Saturday but he’s expected to revert to a back three tomorrow with Antonio Rudiger, Andreas Christensen and Cesar Azpilicueta keeping their places. That means Kurt Zouma will miss out on a spot in the Chelsea starting eleven.

Midfield: Ben Chilwell started at left-back at the weekend but with a switch in formation we could see him dropping to the bench tomorrow with Marcos Alonso recalled to start in the left wing-back position.

Reece James could also come back into the Chelsea team on the opposite flank with Christian Pulisic making way. Jorginho is suspended so Mateo Kovacic is set to continue alongside N’Golo Kante in midfield with Billy Gilmour on the bench.

Attack: Olivier Giroud scored a stunning winner in the first leg and it wouldn’t be a surprise to see him recalled to start up front against a physical Atletico Madrid side but Tammy Abraham is still nursing an ankle injury so he won’t be involved.

Timo Werner is also set for a recall to the Chelsea attack as Mason Mount is suspended tomorrow night. Kai Havertz could keep his place in the starting eleven but Hakim Ziyech may have to settle for a place among the substitutes along with Callum Hudson-Odoi. 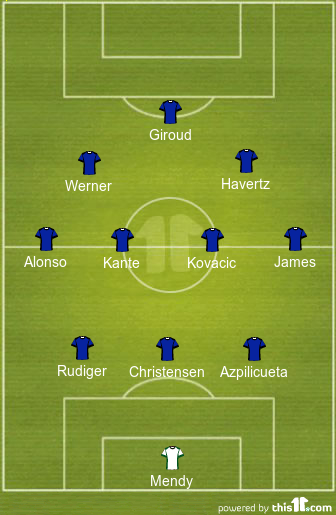