Chelsea take on West Bromwich Albion at Stamford Bridge on Saturday afternoon. Here is the team we expect Thomas Tuchel to select

Chelsea take on West Bromwich Albion at Stamford Bridge on Saturday afternoon. Here is the team we expect Thomas Tuchel to select for the game:

Goalkeeper: Chelsea’s number one goalkeeper Edouard Mendy is expected to be fit to start having recovered from dental surgery so Kepa Arrizabalaga will drop to the bench.

Defence: Thiago Silva is set to return to the squad after working on his fitness during the international break. The Brazilian has been on the sidelines for several weeks with a thigh injury but is expected to return to the heart of the Chelsea back three tomorrow.

Antonio Rudiger should keep his place while Cesar Azpilicueta is also likely to start on the right side of the back three so Andreas Christensen may be the man to miss out. Kurt Zouma and Emerson will also drop out after starting against Sheffield United last time out.

Midfield: Ben Chilwell is expected to start ahead of Marcos Alonso at left wing-back while Reece James should line-up on the right flank. Callum Hudson-Odoi has recovered from a shoulder injury but he may have to make do with a place on the bench.

N’Golo Kante has been ruled out with a thigh injury so Jorginho is set to start alongside Mateo Kovacic in the middle of Chelsea’s midfield this weekend.

Attack: Tammy Abraham is back in contention after recovering from an ankle injury but he may have to settle for a place among the substitutes as Kai Havertz could start in attack.

Timo Werner is set to return after being rested for Chelsea’s FA Cup win before the international break so Christian Pulisic is set to make way to the bench where he’ll be joined by Olivier Giroud.

Mason Mount has been one of Chelsea’s best players in recent months so he should start in attack meaning Hakim Ziyech may have to make do with a place on the bench against WBA tomorrow. 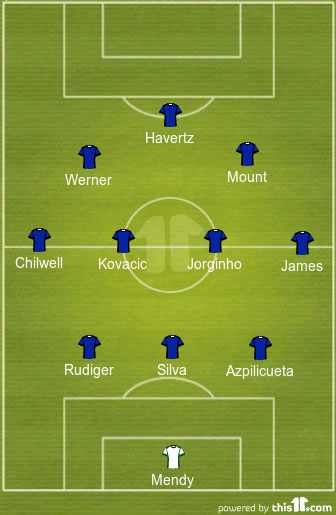