Manchester United take on Brighton & Hove Albion at Old Trafford on Sunday night. Here is the line-up we think Ole Gunnar Solskjaer will select for the game:

Goalkeeper: David De Gea is pushing for a recall but Dean Henderson is being tipped to retain the gloves having started in each of United’s last six matches in all competitions.

Defence: Victor Lindelof is a doubt for the game tomorrow after missing training following his early withdrawal from the Sweden squad last week. Eric Bailly is expected to start alongside Harry Maguire in the middle of the Man Utd defence if Lindelof is ruled out.

Aaron Wan-Bissaka will once again start at right-back but we should see a change on the other side of the back four with Luke Shaw recalled in place of Alex Telles after he was rested for the FA Cup defeat at Leicester last time out.

Midfield: Paul Pogba is back to full fitness after getting more minutes under his belt while away with France during the international break so he’s expected to start for Manchester United tomorrow night.

Pogba is likely to line-up alongside Fred in the middle of the park so Scott McTominay and Nemanja Matic may have to settle for places among the substitutes against Brighton.

Donny van de Beek started against Leicester two weeks ago but he’s set to drop back to the bench with Bruno Fernandes recalled to start in the attacking midfield position for Man Utd.

Attack: Marcus Rashford has handed United a major boost after returning to training following an ankle injury that kept him out of action recently so he could be passed fit to start on the left side of the attack tomorrow.

However, Anthony Martial is a doubt after picking up a knee injury while playing for France last week so Edinson Cavani is likely to lead the line up front for the hosts at Old Trafford.

Daniel James continued his fine recent form while away with Wales during the break so he may have done enough to keep his place on the right wing. That means Mason Greenwood may have to make-do with a place among the subs. 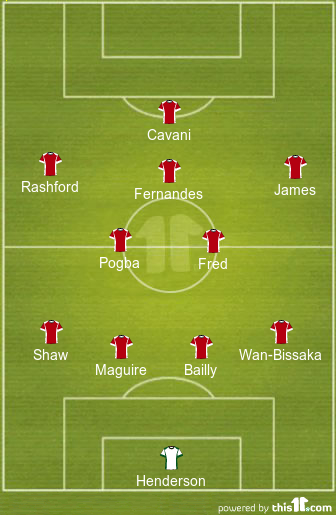