Chelsea take on Porto in the Champions League quarter finals on Wednesday night. Here is the team we expect Thomas Tuchel to select for the game:

Chelsea take on Porto in the Champions League quarter finals on Wednesday night. Here is the team we expect Thomas Tuchel to select for the game:

Goalkeeper: Edouard Mendy is expected to once again keep goal for Chelsea tomorrow despite conceding five times against West Brom at the weekend so Kepa Arrizabalaga will remain on the bench.

Defence: Thiago Silva was sent off during that shock defeat to the Baggies on Saturday and the Brazilian could be dropped against Porto with Andreas Christensen coming in. Antonio Rudiger is also expected to be recalled with Kurt Zouma making way while Cesar Azpilicueta will keep his place to complete the back three.

Midfield: Chelsea will welcome N’Golo Kante back into the squad after he recovered from a thigh injury, however, Tuchel has confirmed the Frenchman is only fit enough for a place on the bench tomorrow.

Therefore, Jorginho should keep his place alongside Mateo Kovacic in the middle of the park. Reece James could start on the right flank once again but we may see a change on the left with Ben Chilwell coming in for Marcos Alonso.

Attack: Tammy Abraham is back in contention after recovering from an ankle injury but he’s expected to be named among the substitutes. Olivier Giroud is also pushing for a recall but Timo Werner could keep his place up front.

Kai Havertz is expected to come back into the Chelsea attack after being rested at the weekend while Mason Mount is almost certain to be recalled as the Blues missed him against West Brom.

That means Hakim Ziyech will drop to the bench against Porto. Christian Pulisic is fit despite picking up a knock against WBA but he may have to make-do with a substitutes role tomorrow night along with Callum Hudson-Odoi. 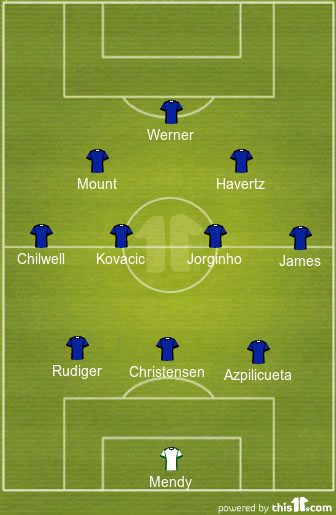