Goalkeeper: It’s been 14 games since Bernd Leno kept a clean sheet and some feel he should have done better with the Slavia Prague equaliser on Thursday but there’s no doubt he’ll keep his place tomorrow.

Defence: Arsenal have an issue at left-back as Kieran Tierney has been ruled out for at least a month with a knee injury. Cedric Soares struggled to deputise for the Scotsman on Thursday night and was at fault for the Slavia Prague goal but he’s still expected to keep his place at Sheffield United.

With Calum Chambers struggling with a knock, Hector Bellerin will continue at right-back but we may see Arsenal make a change in the middle of defence with Pablo Mari recalled.

Gabriel was partially at fault for the Slavia Prague goal and he might need a rest ahead of the second leg so Mari could start alongside Rob Holding with David Luiz out injured.

Midfield: Thomas Partey is likely to be rested ahead of the crucial Europa League quarter-final second leg. Mohamed Elneny is an option for Arsenal but I think we’ll see Dani Ceballos recalled to start alongside Granit Xhaka.

Martin Odegaard has been ruled out of the trip to Sheffield United due to an ankle injury that kept him out of the Prague game so Emile Smith Rowe is expected to retain his place in the attacking midfield role.

Attack: Arsenal are expected to make some changes in attack with captain Pierre-Emerick Aubameyang set for a recall up front after his shock omission from the starting eleven on Thursday.

Alexandre Lacazette is likely to make way after his costly miss against Prague while Nicolas Pepe could be recalled in place of Willian after scoring off the bench last time out.

Bukayo Saka is expected to be rested ahead of Arsenal’s vital trip to Prague next week so Gabriel Martinelli could be handed a rare start in attack tomorrow night. 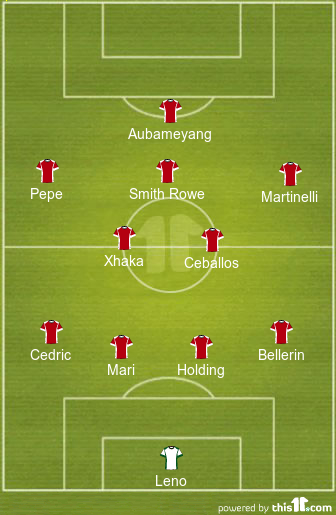