Man Utd take on Granada in the second leg of their Europa League tie on Thursday. Here is the line-up we think Ole Gunnar Solskjaer will select

Manchester United take on Granada in the second leg of their Europa League quarter final tie on Thursday night. Here is the line-up we think Ole Gunnar Solskjaer will select for the game:

Goalkeeper: David De Gea started in the first leg win in Spain last week so he’s expected to be recalled to line-up between the sticks tomorrow with Dean Henderson making way.

Defence: United will be without two key defenders tomorrow night as Harry Maguire and Luke Shaw are suspended after receiving yellow cards in the first leg last week.

Alex Telles is set to replace Shaw at left-back while Axel Tuanzebe is in-line to partner Victor Lindelof in Maguire’s absence as Eric Bailly remains out after testing positive for Covid. Aaron Wan-Bissaka will once again start at right-back.

Midfield: Manchester United are also without the suspended Scott McTominay for the decisive second leg so Paul Pogba is expected to start alongside Fred in the middle of the park. That means Nemanja Matic will have to settle for a place on the bench once again.

Donny van de Beek is pushing for a recall and Solskjaer might be tempted to rest Bruno Fernandes with United holding a 2-0 lead from the first leg. However, with several other key players out, the United boss may not want to make too many changes so Fernandes could start once again in the attacking midfield role tomorrow night.

Attack: Marcus Rashford is a major doubt after failing to complete training today due to an on-going foot injury that’s still causing him discomfort so he’s unlikely to be risked from the start.

Anthony Martial is out for the season with a knee injury so Edinson Cavani is set to keep his place up front for Man Utd while Mason Greenwood could be recalled to line-up on the wing after scoring off the bench at the weekend.

Daniel James missed United’s 3-1 win at Tottenham due to a minor muscle injury but the attacker is back in contention and could be recalled tomorrow. Amad Traore and Juan Mata may have to settle for places on the bench once again. 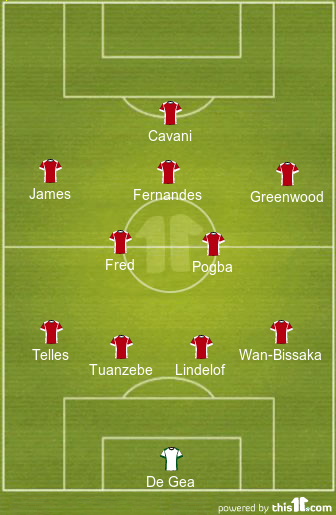