Arsenal take on Everton at the Emirates Stadium on Friday evening. Here is the team Gooner Mac expects Mikel Arteta to select:

Arsenal take on Everton at the Emirates Stadium on Friday evening. Here is the team Gooner Mac expects Mikel Arteta to select:

Goalkeeper: Mat Ryan was handed a shock start in goal against Fulham last week but Bernd Leno is fully expected to be recalled between the sticks for the visit of Everton.

Defence: The Gunners are also expected to make a couple of changes to the back four that started during the 1-1 draw last Sunday. Calum Chambers is pushing for a recall so he could replace Hector Bellerin at right-back.

Pablo Mari is also set to come back into the side to renew his partnership with Rob Holding meaning Gabriel will be the man to make way. David Luiz remains out with a knee injury but should return to training next week.

Kieran Tierney is also still out for Arsenal and isn’t expected to return until the final weeks of the season. Cedric Soares has struggled filling-in for the Scottish defender so Granit Xhaka could keep his place at left-back tomorrow night.

Midfield: Thomas Partey was rested for the draw with Fulham so he’s set for a recall against Everton. With Xhaka at left-back, Dani Ceballos is likely to keep his place in the starting eleven so Mohamed Elneny will be the man to drop out.

Martin Odegaard is back in training after missing the last three Arsenal games with an ankle injury. The Norwegian international faces a late fitness to see if he’ll be fit to face Everton but a place on the bench is the best he can realistically hope for.

Attack: The Gunners have a big problem in attack as Alexandre Lacazette and Pierre-Emerick Aubameyang have both been ruled out of the game versus Everton. Lacazette picked up a hamstring injury against Fulham while Aubameyang is still recovering from malaria.

Therefore, Arteta could hand Eddie Nketiah a rare start up front after the youngster came off the bench to score a late equaliser for Arsenal against Fulham last weekend.

Bukayo Saka should keep his place on the right flank but we could see a change on the opposite side of attack with Nicolas Pepe coming in for Gabriel Martinelli. 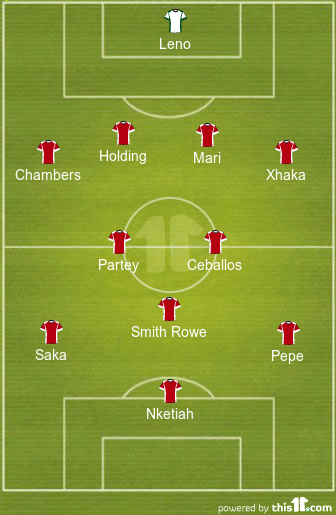