Arsenal take on Villarreal in the first leg of their Europa League semi-final tie on Thursday. Here is the team we expect Mikel Arteta to select:

Arsenal take on Villarreal in the first leg of their Europa League semi-final on Thursday evening. Here is the team Gooner Mac expects Mikel Arteta to select:

Goalkeeper: Bernd Leno made a huge error for the Everton winner at the weekend but the German stopper is still expected to keep his place ahead of Mat Ryan for this crucial game.

Defence: Kieran Tierney could be back in contention after making a swift recovery from a knee injury. The Scottish international trained on Thursday but Arteta insists he won’t take any risks with the full-back. Therefore, if Tierney isn’t risked from the start, Arsenal could name an unchanged defence with Granit Xhaka keeping his place at left-back.

Calum Chambers appears to have edged ahead of Hector Bellerin and Cedric Soares as Arteta’s first choice right-back so he may get another start tomorrow. Pablo Mari and Rob Holding have forged a solid partnership so they may continue in the middle of the Arsenal back four with Gabriel on the bench along with David Luiz – who’s back from a knee injury.

Midfield: With Xhaka at left-back, Dani Ceballos should continue in midfield alongside Thomas Partey. Mohamed Elneny would be the back-up option from the bench.

Martin Odegaard is back in contention after recovering from an ankle injury so he could start in the No.10 role for Arsenal against Villarreal.

Attack: Arsenal have been handed a major boost after Pierre-Emerick Aubameyang returned to full training after recovering from malaria. As long as the Gabon hitman is fully fit, he could lead the line up front.

Alexandre Lacazette is also back in the squad after overcoming a minor hamstring injury that kept him out of Arsenal’s defeat to Everton at the weekend but he may have to settle for a place on the bench.

Bukayo Saka will no doubt start once again for Arsenal but it will be interesting to see who Arteta picks on the left. Nicolas Pepe, Gabriel Martinelli and Willian are among his options but Emile Smith Rowe is likely to get the nod 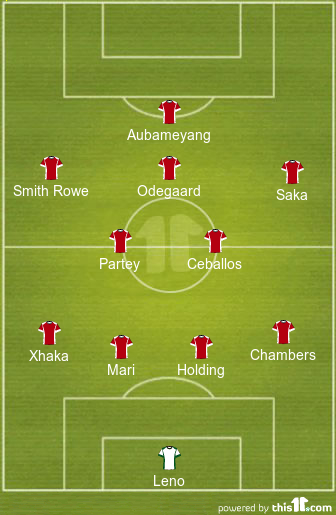