Chelsea take on Fulham at Stamford Bridge on Saturday evening. Here is the team we expect Thomas Tuchel to select for the game:

Chelsea take on Fulham at Stamford Bridge on Saturday evening. Here is the team we expect Thomas Tuchel to select for the game:

Goalkeeper: Edouard Mendy is expected to start between the sticks once again for Chelsea this weekend so Kepa Arrizabalaga will remain on the bench.

Defence: Antonio Rudiger has been ruled out of the Fulham game this weekend after picking up a knock during the closing stages of Chelsea’s 1-1 draw with Real Madrid in midweek.

Thiago Silva is expected to be rested ahead of the return leg of the Champions League semi-final so Kurt Zouma could be recalled to start alongside Andreas Christensen. Emerson Palmeiri may also get a rare start on the left side of the back three.

Midfield: Cesar Azpilicueta has been playing in a wider role on the right flank in recent games but the veteran defender is expected to be rested this weekend ahead of the crucial Madrid second leg.

Therefore, Reece James should be recalled to start tomorrow evening while Marcos Alonso could also come back into the Chelsea starting eleven with Ben Chilwell given a breather.

Mateo Kovacic remains on the sidelines as he’s still nursing a thigh injury that’s troubled him lately. Billy Gilmour is an option if Tuchel wants to mix things up but N’Golo Kante is likely to continue alongside Jorginho in the middle of the park.

Attack: Timo Werner missed another sitter against Madrid on Tuesday night so the German attacker could drop out tomorrow with Olivier Giroud handed a rare Premier League start up front.

Mason Mount has become a key player for Chelsea this season and he could be protected ahead of the Madrid game while Christian Pulisic may also be rested after scoring the away goal on Tuesday night.

Hakim Ziyech is in-line for a recall in attack while Kai Havertz is also likely to start against Fulham this weekend, however, Callum Hudson-Odoi may have to settle for a place on the bench along with Tammy Abraham. 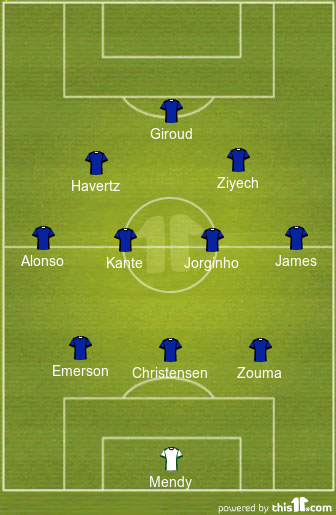