Man Utd take on Roma in the second leg of their Europa League semi-final on Thursday. Here is the line-up we think Ole Gunnar Solskjaer will select

Manchester United take on Roma in the second leg of their Europa League semi-final tie on Thursday night . Here is the line-up we think Ole Gunnar Solskjaer will select for the game:

Goalkeeper: David De Gea kept goal in the first leg and is expected to be recalled between the sticks tomorrow so Dean Henderson will drop to the bench.

Defence: Roma need to score at least four goals to progress to the final as Man Utd are holding a commanding 6-2 lead from the first leg victory at Old Trafford so Solskjaer is likely to make a couple of changes in defence.

Eric Bailly could come in alongside Harry Maguire with Victor Lindelof rested while Alex Telles is pushing for a recall at left-back. That would allow Luke Shaw to get a well-deserved breather while Aaron Wan-Bissaka is likely to continue at right-back.

Midfield: Manchester United could also mix things up in midfield with Nemanja Matic getting a run-out tomorrow. Fred is expected to keep his place in the middle of the park so Scott McTominay could be the man to make way if Matic is recalled.

Donny van de Beek will be hoping to make a rare start tomorrow night but Solskjaer has been very reluctant to leave Bruno Fernandes out of his side under any circumstances this season. Therefore, we’re likely to see Fernandes keep his place with van de Beek on the bench once again.

Attack: Man Utd will be fresh after their Premier League game with Liverpool was postponed on Sunday but we could still see Solskjaer making one key change with Marcus Rashford given a rest. The England forward has been nursing a foot injury so it would make sense to protect him in this fixture.

Daniel James hasn’t travelled to Rome due to injury but Mason Greenwood is fully fit and could replace Rashford on the wing with Paul Pogba keeping his place out wide after a number of impressive performances of late.

Anthony Martial continues to recover from a knee injury so Edinson Cavani could lead the line up front and he’ll be in confident mood after scoring a brace against Roma during Man Utd’s first leg win. 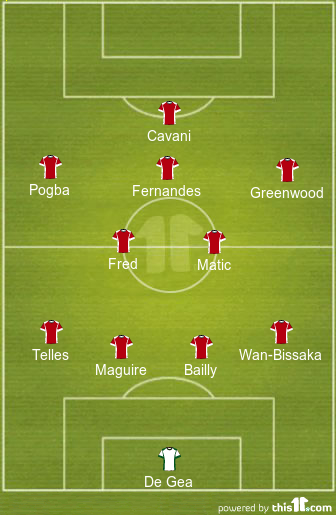