Chelsea take on Manchester City in the Champions League final on Saturday night. Here is the team we expect Thomas Tuchel to select for the game:

Chelsea take on Manchester City in the Champions League final on Saturday night. Here is the team we expect Thomas Tuchel to select for the game:

Goalkeeper: Chelsea will assess the fitness of Edouard Mendy ahead of the final after he was forced off with a chest injury during the defeat to Aston Villa last weekend. However, Mendy has taken part in training this week so is expected to be passed fit meaning Kepa Arrizabalaga will have to settle for a place on the bench.

Defence: Andreas Christensen is pushing for a recall after returning to full fitness following a thigh injury and the Danish international could start against Man City tomorrow night.

Antonio Rudiger and Thiago Silva are almost certain to keep their places in Chelsea’s back three so Reece James could be the man to make way. James has been playing in defence lately but could miss out on a starting spot if Christensen is recalled. Kurt Zouma will also have to settle for a substitutes role.

Midfield: Cesar Azpilicueta has been playing in a wider role in the last few games and he could keep his place against City despite being sent off at Villa Park on the final day of the Premier League season. Ben Chilwell should start ahead of Marcos Alonso on the left flank.

N’Golo Kante will be given a late fitness test after struggling with a thigh injury lately but the Frenchman has trained this week and should be fit for the final. Jorginho is expected to start once again in Chelsea’s midfield so Mateo Kovacic may be the man to miss out. Kovacic has only recently returned from injury and hasn’t looked fully match fit.

Attack: Mason Mount is one of the first names on the Chelsea team sheet these days following a superb campaign so he’s expected to keep his place in attack against Manchester City. Christian Pulisic is also likely to start so Hakim Ziyech and Callum Hudson-Odoi may miss out on starting spots tomorrow.

The big decision for Tuchel is who to deploy up front as the German coach has alternated between Timo Werner and Kai Havertz in recent months. Werner started against Villa at the weekend but Havertz could be given the nod in the Champions League final. Tammy Abraham and Olivier Giroud will be options from the bench. 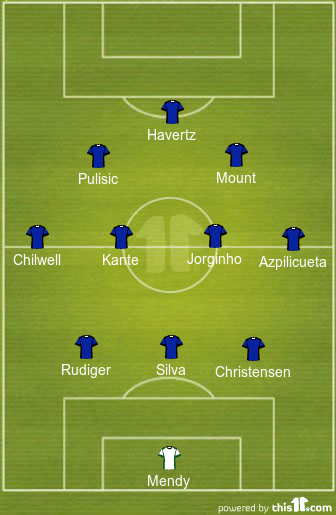