Liverpool begin their Champions League campaign when they take on AC Milan at Anfield on Wednesday night. Here is the team we expect Jurgen Klopp to select

Liverpool begin their 2021/22 Champions League group stage campaign when they take on AC Milan at Anfield on Wednesday night. Here is the team we expect Jurgen Klopp to select for the game:

Goalkeeper: Alisson Becker is certain to keep his place between the sticks tomorrow night so Caoimhín Kelleher will remain on the bench.

Defence: Liverpool eased to a 3-0 victory over Leeds United at the weekend but Klopp may be tempted to freshen things up in defence as he has a wealth of talent available to him at centre-back now that his players are all fit.

Virgil van Dijk is expected to keep his place but Klopp may decide to give Joel Matip a breather for the visit of AC Milan. Joe Gomez is pushing for a recall but Ibrahima Konate could be handed his debut as the 22-year-old looks to force his way into the Liverpool line-up following his summer move from RB Leipzig.

Trent Alexander-Arnold should keep his place at right-back for the Reds while Andrew Robertson should once again occupy the left-back position with Konstantinos Tsimikas remaining on the bench.

Midfield: Liverpool were dealt a huge blow at the weekend as Harvey Elliott is facing months on the sidelines after dislocating his ankle against Leeds United on Sunday so Klopp will be forced into at least one change in midfield.

Curtis Jones, Naby Keita, James Milner and Alex Oxlade-Chamberlain are all options for the Merseysiders but I think we’ll see skipper Jordan Henderson recalled to line-up alongside Thiago Alcantara and Fabinho in the middle of the park.

Forward: Liverpool forward Roberto Firmino is set to miss out once again as he continues to recover from a thigh injury that he picked up before the international break.

Therefore, Diogo Jota is expected to keep his place up front for Liverpool against AC Milan with Mohamed Salah and Sadio Mane offering support in attack. Takumi Minamino is set to miss out due to a thigh problem. 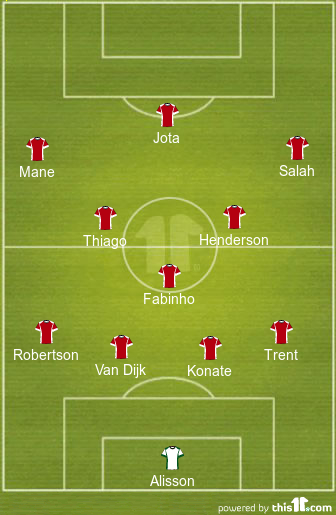