Chelsea take on Aston Villa at Stamford Bridge in the third round of the Carabao Cup on Wednesday night. Here is the team we expect Thomas Tuchel to select

Chelsea take on Aston Villa at Stamford Bridge in the third round of the Carabao Cup on Wednesday night. Here is the team we expect Thomas Tuchel to select for the game:

Goalkeeper: Edouard Mendy missed the win over Tottenham with a groin injury and he won’t be ready to return tomorrow night so Kepa Arrizabalaga is set to continue between the sticks.

Defence: Chelsea are expected to make changes in defence with Thiago Silva almost certain to be rested after his excellent performance against Spurs at the weekend. Antonio Rudiger is also likely to make way with Trevoh Chalobah coming in to the back three.

Andreas Christensen could keep his place but Reece James may return to start on the right side of the Chelsea defence after being an unused substitute at the weekend.

Midfield: Cesar Azpilicueta is expected to be rested with Callum Hudson-Odoi recalled in the right wing-back role while Ben Chilwell should replace Marcos Alonso on the left after struggling to establish himself as a regular this season.

Chelsea have some top class options in the middle of the park so Jorginho and Mateo Kovacic are likely to be rested ahead of this weekend’s huge Premier League clash with Manchester City.

Summer signing Saul Niguez should get another run out while N’Golo Kante could start after making his injury comeback off the bench at the weekend. Tuchel may be mindful of the City game but Kante needs to build up his match fitness to put himself in contention to start on Saturday evening.

Attack: Romalu Lukaku is expected to be given a breather to ensure he’s fresh to face Man City so Timo Werner could be recalled to lead the line up front for Chelsea tomorrow night.

Hakim Ziyech is also in-line for a recall in attack with Mason Mount rested but Christian Pulisic remains a doubt with an ankle injury that’s hampered him lately. Therefore, Kai Havertz may keep his place in the Chelsea starting eleven – although Ross Barkley and Ruben Loftus-Cheek are options for Tuchel if he wants to rest the German international. 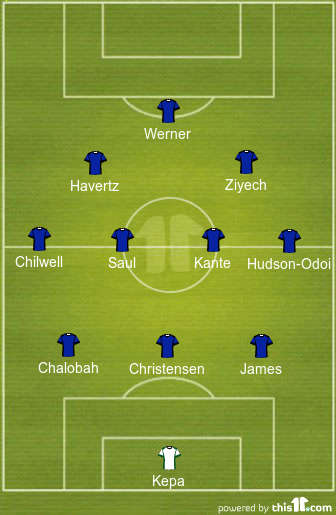