Arsenal take on Tottenham at the Emirates Stadium on Sunday afternoon. Here is the team Gooner Mac thinks Mikel Arteta will select:

Arsenal will be looking to maintain the momentum with another with when they take on Tottenham at the Emirates Stadium on Sunday afternoon. Here is the team Gooner Mac thinks Mikel Arteta will select:

Goalkeeper: Bernd Leno was back in goal and kept a clean sheet during Arsenal’s win over AFC Wimbledon in the Carabao Cup on Wednesday night, however, Aaron Ramsdale hasn’t put a foot wrong since coming into the team so he’s expected to be recalled on Sunday.

Defence: Arsenal appear to have finally found a settled, and reliable, back four so we should see plenty of changes from the defence that featured in the League Cup last time out.

Takehiro Tomiyasu has enjoyed an impressive start to life in England and he’s set to replace Cedric Soares at right-back while Kieran Tierney will come in for Nuno Tavares on the opposite flank.

Gabriel has been excellent for the Gunners since returning to fitness so he should line-up alongside Ben White in the middle of the back four against Tottenham with Rob Holding and Pablo Mari making way.

Midfield: Thomas Partey built-up his fitness with a 60-minute run-out against AFC Wimbledon on Wednesday night and the Ghanaian international is almost certain to retain his place against Tottenham this weekend.

Granit Xhaka is back in contention after serving his three-match suspension and Arteta said the Swiss international has been looking good in training so I expect the boss will give him an immediate recall.

Albert Sambi Lokonga continued his fine start to life in north London with another assured performance in midweek but he may find himself on the bench on Sunday while Mohamed Elneny and Asinley Maitland-Niles are also set to miss out on a place in Arsenal’s starting eleven.

Martin Odegaard was given a rest from the entire squad in the League Cup win so the Norwegian international will be recalled against Tottenham to start in the attacking midfield role.

Attack: Arsenal will make wholesale changes in attack with several players set for recalls. Pierre-Emerick Aubameyang should return to lead the line up front after being rested in midweek meaning Alexandre Lacazette drops out despite getting on the score-sheet against AFC Wimbledon.

Bukayo Saka will also come back into the Arsenal attack after being given a breather last time out while Emile Smith Rowe could start out wide ahead of Nicolas Pepe after scoring off the bench on Wednesday.

Gabriel Martinelli is expected to drop to the bench while Eddie Nketiah will also make way despite scoring a fine goal in the Carabao Cup win. 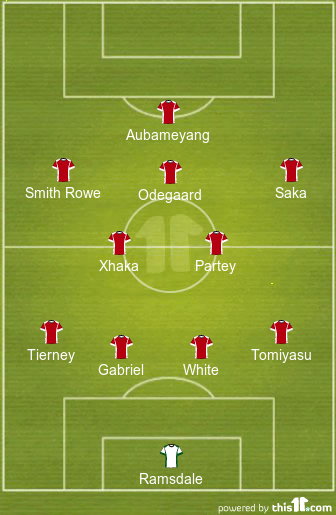