Chelsea take on Southampton at Stamford Bridge on Saturday afternoon. Here is the team we expect Thomas Tuchel to select for the game:

Chelsea take on Southampton at Stamford Bridge on Saturday afternoon. Here is the team we expect Thomas Tuchel to select for the game:

Goalkeeper: Edouard Mendy will once again keep goal for Chelsea so Kepa Arrizabalaga will have to make-do with a place on the bench.

Defence: Tuchel is unlikely to make too many changes to his back three with Antonio Rudiger is expected to start once again while Andreas Christensen should also keep his place after becoming a regular in the Chelsea defence this season.

Thiago Silva has been rested at times this season as Tuchel looks to protect the 37-year-old’s fitness but we think he’ll keep his place against Southampton before the international break starts. Trevoh Chalobah and Malang Sarr will be among the substitutes.

Midfield: Reece James has once again been ruled out with an ankle injury that kept him out of the 1-0 defeat to Juventus in midweek so Cesar Azpilicueta is set to continue in the right wing-back position this weekend.

Ben Chilwell is pushing for a recall on the opposite flank so Marcos Alonso could be given a rest. N’Golo Kante once again misses out for Chelsea after testing positive for Covid so Mateo Kovacic is expected to continue alongside Jorginho with Saul Niguez on the bench.

Attack: Chelsea have been handed a big boost with the news that Mason Mount is back in contention after recovering from a knock that kept him out of the Champions League clash in midweek. The England international is likely to be recalled to start in the front three tomorrow afternoon.

Kai Havertz could keep his place so Hakim Ziyech may be the man to make way for Mount. Christian Pulisic is still recovering from a foot injury but Ruben Loftus-Cheek and Ross Barkley could be options from the bench.

Romalu Lukaku will obviously lead the line up front once again for Chelsea so Timo Werner may have to settle for a place among the substitutes tomorrow. 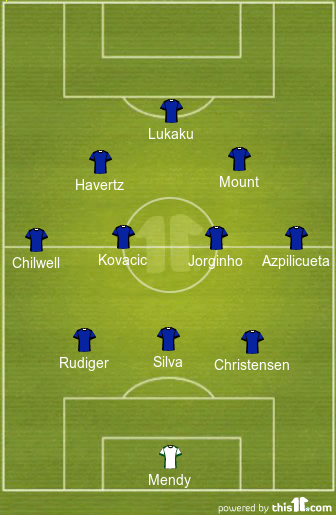