Chelsea entertain Southampton in the fourth round of the Carabao Cup on Tuesday.

The Blues are currently on a four-match winning streak across all competitions. They have won their last three games, scoring 12 goals and conceding none in the process.

Thomas Tuchel will be hoping to extend the fine run of form tomorrow, but he is likely to make wholesale changes with several fringe players bound to get the chance to impress.

Here is how Chelsea could line up against Southampton.

Goalkeeper: Kepa Arrizabalaga has been the Blues’ cup goalkeeper ever since Edouard Mendy joined last year. The Spaniard will be aiming to guide the club to the quarter-final stage of the competition, having missed out last season.

Defence: The decision could be straightforward for Tuchel. Cesar Azpilicueta, Malang Sarr, Marcos Alonso and Cesar Azpilicueta were unused substitutes in the 7-0 league rout of Norwich City. The quartet should start tomorrow in a complete reshuffle of the defence.

We fancy Tuchel to revert to a four-man defence for the game. This could see Azpilicueta feature at right-back with Christensen accompanying Sarr at the heart of the backline. Marcos Alonso should make his first start since September at left-back ahead of Ben Chilwell.

Midfield: N’Golo Kante was not risked against the Canaries due to a minor muscle injury. Tuchel has hinted that the Frenchman could return for the Saints clash, but it won’t be a surprise if he starts on the bench as a precaution. Jorginho and Mateo Kovacic could also be given a breather. Hence, Ross Barkley, Saul Niguez and Ruben Loftus-Cheek could make up the three-man midfield.

Attack: With injuries to Romelu Lukaku, Timo Werner and Christian Pulisic, Tuchel does not have much room for rotation. Kai Havertz looks set to continue in the false number nine role. Tuchel has hinted that Callum Hudson-Odoi could also start. Saturday’s hat-trick hero Mason Mount could be the one rested. Hakim Ziyech has been in poor form since his shoulder injury. He could be handed another chance to prove himself. 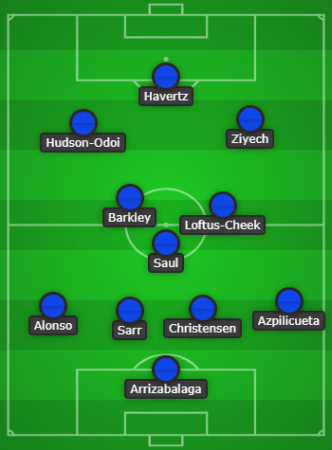