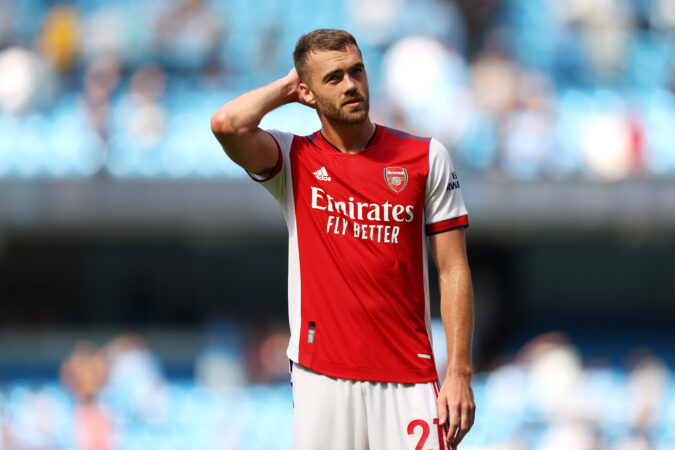 Arsenal defender Calum Chambers has emerged as a January target for Everton, according to The Sun.

The England international was a regular at right-back during the second half of last season, but he has lost his place after the summer arrival of Takehiro Tomiyasu.

Meanwhile, Gunners boss Mikel Arteta has also preferred Cedric Soares ahead of him in the Carabao Cup. The Portuguese started the recent cup tie against Leeds United.

With his contract expiring next summer, the Gunners are open to sanctioning his sale in January. The Toffees have emerged as potential contenders to sign him.

The Merseyside outfit are eyeing a new right-back to takeover from captain Seamus Coleman. Ainsley Maitland-Niles was eyed on an initial loan deal last summer.

Arteta personally intervened to block the transfer. Maitland-Niles has since been involved heavily, and the Gunners appear unlikely to offload him at the turn of the year.

Chambers is reportedly seen as the alternative option for Rafael Benitez’s side. He could be available for a cut-price fee of around £5 million in the upcoming transfer window.

Chambers showed plenty of promise during the back end of the previous campaign. He made decisive overlapping runs and produced some quality crosses into the box.

Despite this, the Gunners chose to sign Tomiyasu this summer. The Japan international does not offer much going forward, but he has provided the defensive assurance.

It appears the right time for the Gunners and Chambers to part ways. At 26, he is in the prime of his career, and could get back to his best form with regular first-team football.

The Toffees could be an ideal destination for him. Coleman is already 33, and Chambers could go on to establish himself as the first-choice right-back for many seasons.

His versatility qualities would also benefit the Toffees. He can comfortably operate in central defence while he has also been effective from the defensive midfield position.

Chamber may not be the only player leaving the Gunners in January. Eddie Nketiah has expressed his desire to move on, and could be sold for a nominal fee in the next transfer window.