Goalkeeper: Klopp resisted the temptation to rest Alisson Becker for Wednesday night’s Champions League win over Porto so the Brazilian is set to continue between the sticks with Caoimhín Kelleher among the substitutes.

Defence: Liverpool should make plenty of changes in defence though as several key players are expected to be recalled. Virgil van Dijk will be one of them after he was rested for the Porto game so he should come in for Ibrahima Konate with Joel Matip keeping his place at the heart of the back four.

Neco Williams put in another assured display in midweek but he’ll make way for the returning Trent Alexander-Arnold at right-back while Andrew Robertson could start at left-back after making his return from injury with a substitute appearance against Porto.

Kostas Tsimikas will feel unlucky to be dropped as he’s performed well in Robertson’s absence but he may have to settle for a place on the bench against Southampton.

Midfield: Jordan Henderson built up his match fitness with another appearance off the bench against Porto so the Liverpool skipper could be ready to return to the starting eleven this weekend.

Fabinho is also set for a recall after being rested in the Champions League group stage victory on Wednesday night. Youngster Tyler Morton impressed during his full debut but he’ll make way for the Brazilian.

Alex Oxlade-Chamberlain has played a lot recently so he may be given a breather with Thiago Alcantara keeping his place in the Liverpool midfield after scoring a fine goal against Porto.

Naby Keita remains a doubt as he works his way back from a thigh injury while Curtis Jones and Harvey Elliott remain on the sidelines with long-term injury issues.

Forward: Klopp is expected to make one change in attack with Diogo Jota set for a recall after he was rested last time out. Takumi Minamino will be the make to drop out after making a rare start in the Champions League.

Mohamed Salah continued his fine form for Liverpool with another goal on Wednesday night so he’ll start once again this weekend while Sadio Mane should line-up against former club Southampton.

Roberto Firmino remains out with a thigh injury but Divock Origi will be an option from the bench for Klopp. 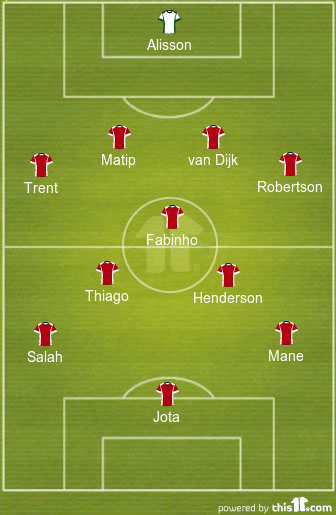