Arsenal will be desperate to get back to winning ways when they take on Southampton at the Emirates on Saturday afternoon. Here is the team we expect Mikel Arteta to select.

Goalkeeper: Aaron Ramsdale has conceded 5 goals in his last 2 games so he’ll be keen to secure a much needed clean sheet at the weekend.

Defence: Kieran Tierney was back in the starting eleven during Arsenal’s disappointing defeat at Everton on Monday night and while he didn’t have his best game [like the rest of his team mates], I still think the Scottish international will keep his place ahead of Nuno Tavares on Saturday.

Takehiro Tomiyasu should continue at right-back for Arsenal against Southampton while Ben White and Gabriel Magalhaes are also definite starters at the heart of the backline. Therefore Rob Holding will have to settle for a place on the bench once again.

Midfield: Granit Xhaka made a surprise return to the starting line-up on Monday night after making a swift recovery from a knee injury. The Swiss international looked a little tired in the second half but he’s still expected to keep his place in Arsenal’s midfield this weekend.

Thomas Partey’s poor form continued with another woeful display against Everton and his inconsistent performances are starting to become a real worry. However, due to a lack of viable top class alternatives, Partey will probably keep his place this weekend.

Youngster Albert Sambi Lokonga will be an option from the bench along with Mohamed Elnen while Ainsley Maitland-Niles could also be in the Arsenal squad.

Attack: Martin Odegaard scored another fine goal on Monday night, his second in as many games, so he deserves to keep his place in the attacking midfield position against Southampton.

Alexandre Lacazette failed to take his opportunity at Goodison Park as he was virtually anonymous up front for Arsenal. Pierre-Emerick Aubameyang is going through a goal drought and missed a great chance at the death to make it 2-2 against Everton but I wouldn’t be surprised to see the Gabon hitman recalled this weekend.

Gabriel Martinelli picked up a knock on Monday and is now a doubt to face Southampton but Emile Smith Rowe should return after the 21-year-old missed the trip to Merseyside with a minor groin problem.

Bukayo Saka should keep his place on the right flank with Smith Rowe on the left meaning Eddie Nketiah and Nicolas Pepe will remain on the bench this weekend.

Here is how we expect Arsenal to line-up: 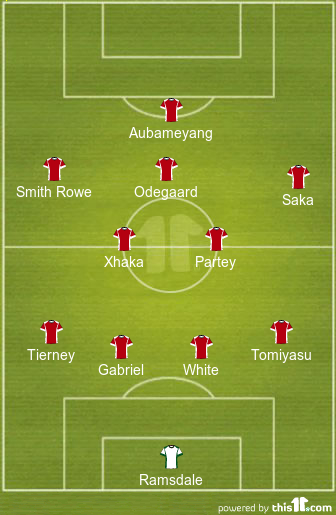