Liverpool get back to Premier League action when they take on Leicester City at the King Power Stadium on Tuesday night.

The Reds saw their clash with Leeds United postponed on Boxing Day so they haven’t played since a thrilling 3-3 draw with Leicester City in the League Cup on the 22nd.

Here is the team we expect Jurgen Klopp to select:

Goalkeeper: Alisson Becker will be recalled between the sticks after being rested for the Carabao Cup quarter-final last week.

Defence: Trent Alexander-Arnold will also come back into the Liverpool side at right-back after being given a breather last time out but Andy Robertson isn’t available as he’s suspended. Therefore, Kostas Tsimikas will keep his place at left-back.

Liverpool have been handed a major boost as Virgil Van Dijk is back in contention after returning to training following a positive covid test. The Dutchman should line-up alongside Joel Matip in the middle of defence so Ibrahima Konate and Joe Gomez will drop out.

Midfield: Fabinho is also available again after covid and the Brazilian should be recalled in the holding role. Youngster Tyler Morton will make way as Jordan Henderson should keep his place in the starting eleven.

Thiago Alcantara returned to training yesterday but he may not be risked from the start so Naby Kieta could keep his place in the Liverpool midfield. Alex Oxlade-Chamberlain may have to settle for a place among the substitutes.

Attack: Mohamed Salah and Sadio Mane are set for recalls after being rested for the penalty shoot out victory over Leicester in the League Cup. Neco Williams and Takumi Minamino will drop out after they started last week.

Liverpool are also expected to bring Diogo Jota back into the side up front meaning Roberto Firmino may have to settle for a place on the bench. Divock Origi is expected to miss out with through injury. 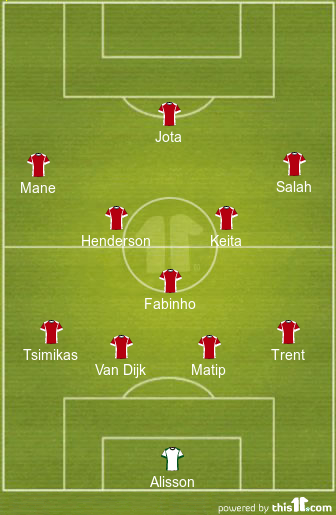