Arsenal take on Burnley at the Emirates Stadium on Saturday afternoon. Here is the side Mikel Arteta is expected to pick for the game

Arsenal will be looking to climb into the top four when they take on Burnley at the Emirates Stadium on Saturday afternoon. Here is the side Mikel Arteta is expected to pick:

Goalkeeper: Aaron Ramsdale will once again start between the sticks for Arsenal. Bernd Leno will therefore have to settle for a place on the bench.

Defence: Arteta is set to receive a huge boost in defence with the return of Takehiro Tomiyasu. The Japan international has been working hard in training this week and should be fit to make his return from a niggling calf injury.

Tomiyasu is expected to be recalled at right-back this weekend, but Cedric Soares is on stand-by if Arteta doesn’t want to risk him from the start.

There shouldn’t be any other changes to Arsenal’s usual back four so Kieran Tierney will continue at left-back. Gabriel and Ben White are set to continue their excellent partnership in the middle of defence following superb displays during the 1-0 win at Wolves last time out.

Midfield: Thomas Partey will keep his place in the middle of the park and Arteta will be hoping for a dominant display from the Ghana international.

Granit Xhaka should start once again so Albert Sambi Lokonga and Mohamed Elneny will have to make-do with places on the bench.

Attack: Arsenal will be without Gabriel Martinelli as he’ll serve a one-game suspension following his controversial sending off against Wolves.

Emile Smith Rowe will therefore be recalled to start on the left side of attack after being consigned to the bench in recent weeks.

Bukayo Saka will no doubt keep his place on the right flank and he’ll be looking to continue his terrific recent run of form. Martin Odegaard will continue in the attacking midfield role this weekend.

Alexandre Lacazette should once again lead the line up front for Arsenal with Eddie Nketiah an option from the bench. Nicolas Pepe will also have to settle for a place among the substitutes. 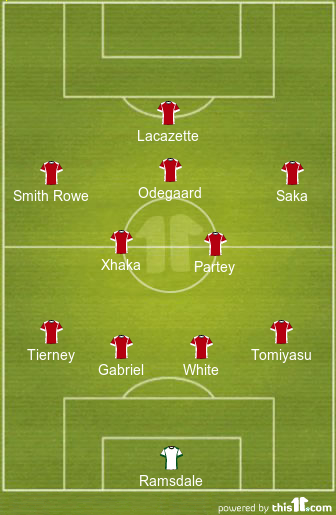