Liverpool will be looking for a win over Norwich City at Anfield on Saturday afternoon. Here is the team we expect Jurgen Klopp to select:

Liverpool will be looking to close the gap at the top of the table with a win over Norwich City at Anfield on Saturday afternoon. Here is the team we expect Jurgen Klopp to select:

Goalkeeper: Number one goalkeeper Alisson Becker is set to continue between the sticks so Caoimhin Kelleher will remain on the bench.

Defence: Ibrahima Konate put in a dominant display during Liverpool’s Champions League win over Inter Milan in midweek. However, he may still drop to the bench on Saturday with Joel Matip recalled to start.

Virgil van Dijk was outstanding at the San Siro and no doubt he’ll keep his place against Norwich. Trent Alexander-Arnold and Andrew Robertson should also continue in the full-back positions. Therefore, Kostas Tsimikas will remain on the bench.

Midfield: Liverpool are likely to freshen things up in midfield with skipper Jordan Henderson pushing for a recall. Henderson was benched for the win at Inter Milan but he should be recalled this weekend.

Naby Keita could also come back into the side with youngster Harvey Elliott making way. Thiago Alcantara could also be rested but Fabinho should keep his place in the holding role.

Liverpool have a wealth of midfield talent at their disposal so the likes of James Milner, Alex Oxlade-Chamberlain and Curtis Jones are all options for the bench along with Elliott and Thiago.

Attack: Liverpool have been dealt a major blow in attack as reports suggest that Diogo Jota’s injury is worse than first thought. The Portuguese international suffered an ankle injury against Inter Milan on Wednesday night and is now facing a spell on the sidelines.

Roberto Firmino is therefore expected to be recalled up front with Jota ruled out of the Norwich game on Saturday. However, Mohamed Salah should once again start in attack for the Reds.

January signing Luis Diaz could be given another chance to impress with Sadio Mane the man to make way. Takumi Minamino and Divock Origi are other attacking options for Klopp from the bench. 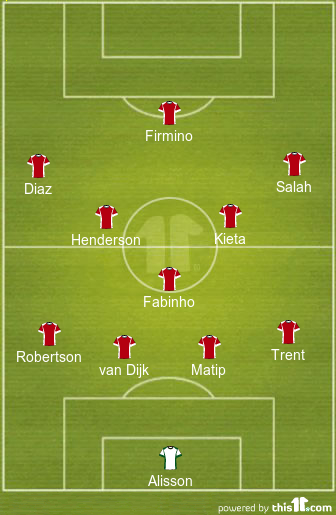