Liverpool host Norwich City in the FA Cup fifth round on Wednesday night. Here is the line-up we expect Jurgen Klopp to select

Liverpool host Norwich City in the FA Cup fifth round on Wednesday night.

The Reds recently celebrated League Cup glory with a penalty shoot-out win over Chelsea. Manager Jurgen Klopp won his first major final at Wembley Stadium, and he will be eyeing another strong run in the FA Cup.

Liverpool comfortably beat Shrewsbury Town and Cardiff City in the previous rounds, and should be favourites against Norwich. The Reds have already beaten them thrice this term, scoring three goals in each game.

Here is how Liverpool could line up against Norwich City:

Goalkeeper: Caoimhin Kelleher started in goal in the Carabao Cup final where he produced a couple of defining saves. The 23-year-old ended up converting what was the winning penalty in the shoot-out. Klopp described him as the ‘best number two in the world’ following the game. Kelleher is expected to be rewarded with another Cup appearance.

Defence: The backline could see multiple changes with key players being rested. Trent Alexander-Arnold and Andrew Robertson could be given a breather with Joe Gomez and Kostas Tsimikas starting in the full-back positions for Liverpool.

Ibrahima Konate has been regularly swapped with Joel Matip for one of the central defensive positions. Matip started the final. Hence, we fancy Konate to come in for the Cameroonian. Virgil van Dijk was not rested for the earlier rounds of the FA Cup, and Klopp may count on his experience alongside the club’s summer signing.

Midfield: There could be a complete reshuffle in Liverpool’s midfield with Jordan Henderson, Fabinho and Naby Keita being rested or dropped to the bench.

James Milner, Curtis Jones and Harvey Elliott could all feature. Thiago Alcantara will miss out after suffering an injury in the warm-up ahead of the League Cup final, but the Spaniard isn’t expected to be out for too long.

Attack: Divock Origi and Takumi Minamino played a key role in the Reds’ run to the League Cup final. The duo are likely to be handed starts in midweek with the main players being rested.

The duo could be partnered by Diogo Jota. The £54m star was not in the starting XI on Sunday, having just returned from an ankle injury. Mo Salah, Luis Diaz and Sadio Mane are expected to be given a breather. 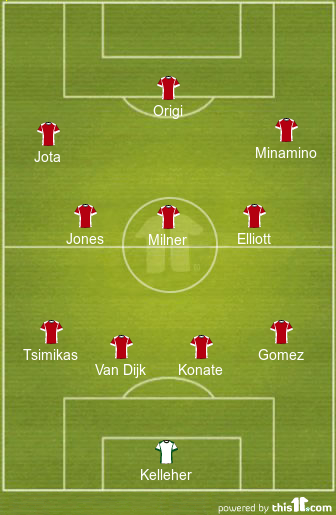