Arsenal will look for a win over Liverpool at the Emirates Stadium on Wednesday night. Here is the side Mikel Arteta is expected to pick for the game.

Arsenal can cement their position in the top four with a win over Liverpool at the Emirates Stadium on Wednesday night. Here is the side Mikel Arteta is expected to pick:

Goalkeeper: Aaron Ramsdale continued his fine form this season with another clean sheet during Arsenal’s 2-0 win over Leicester City on Sunday. Ramsdale will keep his place against Liverpool with Bernd Leno on the bench.

Defence: Arteta confirmed at his press conference today that Takehiro Tomiyasu will be assessed before a decision is made over his availability. The Japan international has been struggling with a calf injury and has only recently returned to training. Arsenal are being cautious not to rush him back too soon so Tomiyasu is expected to miss out against Liverpool with Cedric Soares keeping his place at right-back.

The rest of the back-four should also remain unchanged with Kieran Tierney continuing at left-back. Ben White and Gabriel marshalled another shut-out against Leicester and they’ll keep their places at the heart of Arsenal’s defence tomorrow.

Midfield: Thomas Partey has been excellent in the holding role for the Gunners lately so the Ghana international will start once again when Liverpool arrive at the Emirates Stadium.

Granit Xhaka has also quietly gone about his business despite playing in a more advanced position in recent weeks so he should keep his place ahead of the likes of Albert Sambi Lokonga and Mohamed Elneny.

Martin Odegaard has been one of Arsenal’s star performers in recent weeks and he’s thriving in this young Arsenal team. The Norwegian should retain his place in the middle of the park and Arteta will be hoping for another impressive display from Odegaard against Liverpool tomorrow.

Attack: Emile Smith Rowe made his return against Leicester off the bench after recovering from covid. The £34m-rated attacker is pushing for a recall to the starting eleven but it’s difficult to see how Arteta fits him in at present.

CHECK OUT OUR EXPECTED LIVERPOOL XI

Gabriel Martinelli has been doing a terrific job on the left flank and should keep his place while Bukayo Saka is one of Arsenal’s most important players so there is no way he’ll be dropped.

Alexandre Lacazette has been working tirelessly up front and while his goal return may be disappointing, he’s made up for it with 9 assists in his last 10 games so the Frenchman should keep his place against Liverpool.

Therefore, Smith Rowe may have to settle for a place on the bench where he’ll be joined by Nicolas Pepe and Eddie Nketiah. 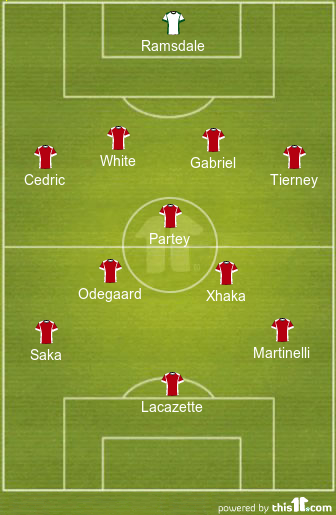