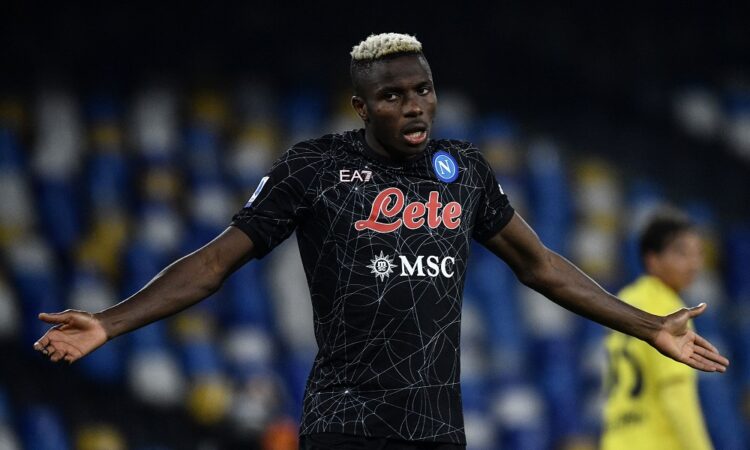 The Gunners terminated Aubameyang’s contract before the January transfer deadline despite failing to find a suitable successor.

The decision was criticised by some fans, but it has not necessarily affected the club’s performances in the Premier League.

Alexandre Lacazette has struggled to find the net leading the line, but has been pivotal in the build-up play with multiple assists.

Ahead of the summer, the Gunners are expected to pursue at least one marquee striker, and Osimhen appears on their radar.

The Serie A outfit are not looking to sanction his sale, but could change their stance if they receive an offer of €100m (£83.8m).

Arsenal are one of many clubs that are monitoring Osimhen. Tottenham Hotspur and Manchester United are also keeping tabs.

Arsenal were eager to land Dusan Vlahovic from Fiorentina in January, but the Serbian opted to join Juventus in a £73.5m deal.

The Gunners did not pursue any other targets in the transfer window. The decision to stay patient has paid off in recent weeks.

Lacazette has been prone to squandering scoring chances, but he tends to bring the best out of the young attackers around.

Ahead of the summer, Arteta has acknowledged that the club need someone who can ‘put the ball in the net‘.

Osimhen could be an ideal option for the Gunners, having made good progress in his second campaign in the Italian top-flight.

The Nigeria international had a debut season disrupted by a shoulder injury. He finished with just 10 goals from 30 games.

He has also been hampered this term by a cheekbone fracture, but has fared better with 15 goals from just 25 appearances.

Osimhen has impressed with his aerial prowess, dribbling and finishing qualities, though his passing still needs improvement.

At 23, he fits into the profile of players that the Gunners are after. They definitely need a striker with a better aerial presence.

It remains to be seen whether Arsenal pay a record fee for Osimhen. It has been claimed that they have a ‘substantial budget’.

Qualifying for the Champions League should boost their prospects of landing him ahead of their Premier League rivals.