Arsenal take on Chelsea at Stamford Bridge on Wednesday night. Here is the side Mikel Arteta is expected to pick for the game.

Arsenal take on Chelsea at Stamford Bridge on Wednesday night. Here is the side Mikel Arteta is expected to pick:

Goalkeeper: Aaron Ramsdale is Arsenal’s undisputed number one so he will keep his place between the sticks ahead of Bernd Leno against Chelsea.

Defence: Takehiro Tomiyasu could return to the squad tomorrow. The Japanese international has been on the sidelines for almost three months but is back in full training and Arteta says he will make a late decision over his availability.

However, even if Tomiyasu is deemed fit to return for the trip to Stamford Bridge, he’s highly unlikely to start just yet so a place on the bench is the best he can hope for. Cedric Soares should continue at right-back for Arsenal.

Kieran Tierney has been ruled out for the rest of the season with a knee injury so Nuno Tavares should keep his place at left-back after a solid display against Southampton at the weekend. Ben White and Gabriel will continue in the middle of Arsenal’s defence against Chelsea.

Midfield: Thomas Partey remains on the sidelines after suffering a thigh injury against Crystal Palace earlier this month. Albert Sambi Lokonga should therefore keep his place in the middle of the park.

Granit Xhaka looked far more comfortable in midfield against Southampton after his short stint at left-back and he should continue alongside Lokonga against Chelsea.

Martin Odegaard should also keep his place in the attacking midfield role – although Arteta may ask the Norwegian international to operate a little deeper at Stamford Bridge.

Attack: Alexandre Lacazette is set to return to the squad after missing Arsenal’s defeat to Southampton due to covid. Eddie Nketiah failed to take his opportunity last time out so Lacazette is expected to be recalled up front.

Bukayo Saka should keep his place in attack tomorrow but we could see Arteta freshen things up with Emile Smith Rowe pushing for a recall. Gabriel Martinelli may be the man to make way.

Nicolas Pepe is another attacking option for the Gunners but he will remain on the bench against Chelsea. 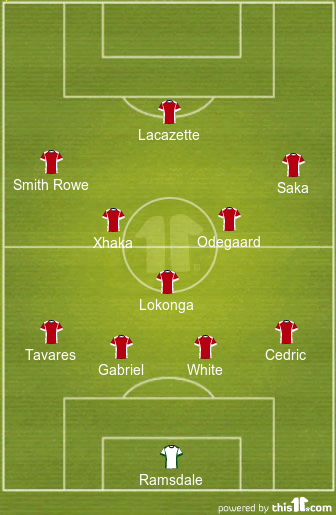