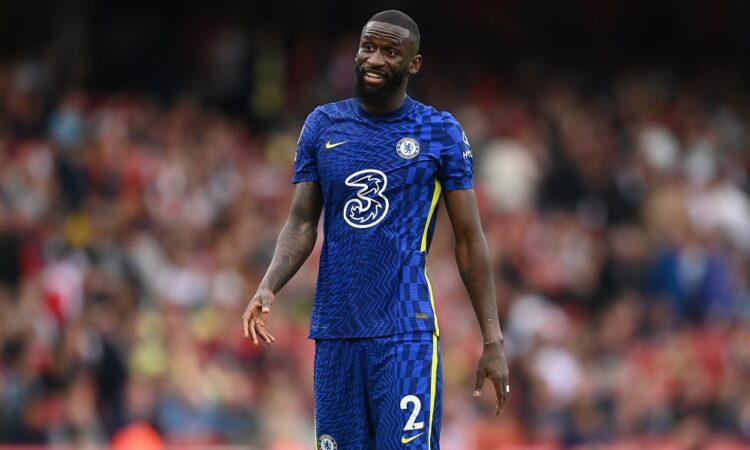 Chelsea manager Thomas Tuchel has said that Antonio Rudiger could feature against Manchester United in the Premier League on Thursday night.

The Blues returned to winning ways against West Ham United yesterday, but the performance was far from convincing. The Hammers also showed a good defensive resolve.

Jorginho squandered a late penalty for Chelsea, but they still ended up on the winning side with Christian Pulisic bagging a 90th-minute winner, coming off the bench.

Speaking after the victory, Tuchel provided an update on Rudiger, who has been unavailable for the past two games against Arsenal and West Ham with a minor discomfort.

The German tactician said that the centre-back has been dealing with a groin and hamstring concern, but could return to full training ahead of the midweek trip to Old Trafford.

He said via Chelseafc.com: “It is a groin in one leg and the other leg a bit the hamstring. He is somebody who plays through pain anyway and is totally used to it. It’s muscle pain, not even an injury but a huge discomfort.”

“He feels insecure because he’s not used to having muscle injuries. He feels like it could happen but he wants to come back. The plan is that he’s back in training on Tuesday for Thursday [against Man United] and hopefully we can stick to the plan.”

Chelsea have moved five points clear of fourth-placed Arsenal after yesterday’s victory. They still have a game in hand, but Tuchel will be glad to end the club’s winless home run.

They are now scheduled to face Red Devils away from home on Thursday. The fixture has been tightly contested with the last three meetings ending in the form of draws.

Tuchel will hope that he has no defensive concerns to deal with. Aside from Rudiger, Reece James missed the London derby on Sunday due to a minor hamstring problem.

It was a precautionary decision to leave him out. Andreas Christensen was part of the starting line-up, but was replaced before the kick-off after suffering from stomach cramps.

All three players have been pivotal to Chelsea’s progress this term. It remains to be seen whether the trio are deemed fit ahead of the Manchester trip to face Ralf Rangnick’s side.