Manchester United take on Brighton at the Amex Stadium on Saturday evening. Here is the line-up we expect Ralf Rangnick to select for the game.

Manchester United take on Brighton at the Amex Stadium on Saturday evening. Here is the line-up we expect Ralf Rangnick to select.

Goalkeeper: David De Gea is a mainstay in the Man Utd starting eleven so the Spaniard will once again keep goal this weekend.

Defence: United will assess Harry Maguire as he looks to return from a knee injury that’s hampered him lately. However, even if Maguire is fit, Rangnick may opt to stick with Victor Lindelof alongside Raphael Varane in the middle of defence after they kept a clean sheet during Man Utd’s 3-0 win over Brentford.

Luke Shaw remains on the sidelines and is unlikely to play again this season so Alex Telles should continue at left-back. Aaron Wan-Bissaka remains a doubt with a knock so Diogo Dalot is set to keep his place at right-back against Brighton.

Midfield: Manchester United will once again be without Paul Pogba due to a calf injury that the French international picked up last month.

However, Fred is pushing for a recall after he made his return from injury last weekend. The Brazilian is likely to come in alongside Scott McTominay with Nemanja Matic making way.

Bruno Fernandes was back among the goals last time out after scoring the opener against Brentford and he’ll keep his place in the attacking midfield role at the Amex Stadium on Saturday.

Attack: Juan Mata was handed a rare start against the Bees for what will be his final appearance at Old Trafford, however, the 34-year-old is expected to drop back to the bench this weekend.

Jadon Sancho will be assessed after missing the last few games with tonsillitis and is unlikely to be fit enough to start. Therefore, Marcus Rashford could be given a recall in the Man Utd attack. The £63m-rated star has been struggling lately so Rashford will be keen to put-in an improved display if he’s given the nod.

Cristiano Ronaldo has been in excellent goalscoring form recently and the Portuguese international will be looking to add to his tally this weekend. Edinson Cavani will have to make-do with a place on the bench. 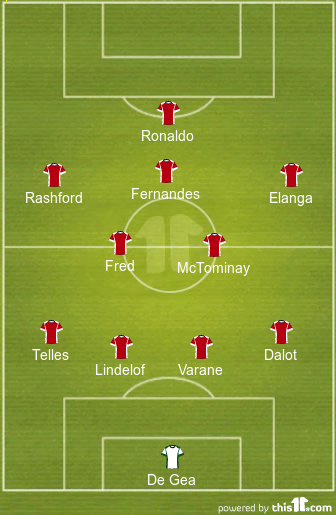