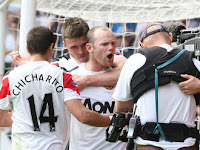 After Wayne Rooney scored a stunning second half hat-trick to help his team stage a dramatic victory, the Manchester United forward let loose with a foul tirade in the camera that was shoved in his face. Rooney’s commitment and desire has been questioned ever since he stated that he wanted to leave United, so it should not come as any real surprise that he was always going to release some of the demons of frustrations, which just happened to be caught on camera.

What would be most interesting to know is whether if Rooney could hear the commentary of ESPN’s Ian Darke and Steven MacManaman, because his words express exactly how every single Manchester United fan felt after listening to them fumble over how to degrade him and the club.

There is no question that he will be subjected to the idea of suspension and a fine for his poor choice of words, but the Football Association should take a hard look at the verbal jive that incites the United players and supporters.

Throughout the match against West Ham, those two commentators mentioned above, which fans are forced to listen to, did not curb their anti-United view, so why should anyone else, even Rooney, have to watch what they say if they don’t have to? Filled with emotions Rooney screamed, “What? F*cking what?!,” which was directed to the haters that despise and try to tarnish all the Manchester United has done for the Premier League and football in general.

After the match Rooney offered a heart felt apology to explain himself, which is something that neither the Premier League chiefs and journalists will do when they, wrongfully, condemn the Reds with their bias belief. Accept it or not, there is becoming an even bigger divide between United and the executives of Premier League, which could very well damage the sport.

United is the best supported club in the top flight of English football, and the jealousy of that is shining every time that FA makes a decision against them. Their new respecting the referee campaign was, unsurprisingly, aimed directly at Sir Alex Ferguson, and media outlets crucified the club by posting photos of United players surrounding the referee.

The press can any excuse as to why they are using United to promote their story, and most of them mention Ferguson’s ridiculous five-match ban was high-profile, but it just solidifies their bias towards the club.

After watching Arsenal’s match with Blackburn Rovers, it just shows that some of the referees, along with most tabloids, possess a bias, inconsistent view towards United. A month after Phil Dowd failed to properly punish Jamie Carragher for his x-rated challenge on Nani in United’s deserved 3-1 loss against Liverpool, he has a decision that could have given Arsenal a title lifeline.

Dowd gave a straight red card to Steven N’Zonzi for a high challenge on Laurent Koscielny, but it was very harsh decision that put Blackburn on the back foot for the remainder of their game. The thing is, Dowd will not be hung out to dry like Rooney will be, but his non-verbal actions, were just as damaging to the sport.

Many people think that this type of thing will not adversely affect Manchester United on the field, but, to be brutally honest, it is killing the game, itself, which is bad for everyone who supports a football team.