We Are Called “Babies” For A Reason…. 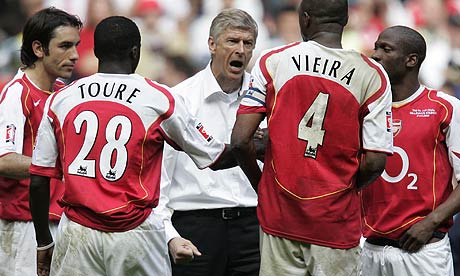 It’s sad to see our club in a state like this. Bruised, battered and helpless. Although similar to what Liverpool were until they got back their King.

Our manager is too soft and too mother like in the way he goes about things. To him this Arsenal team is like a bunch of babies and like a dutiful mother he always defends them when they come under scrutiny.

I think Arsene Wenger has almost over-estimated what they are capable of and they have let him down, so it is a shared responsibility when the team does not do well and collective praise when they do.

I am sure everyone will look at themselves, and that they will bounce back.

Every player has immense respect for Wenger. Cesc calls him a second father. No player, including Denilson, has a bad word to say about him. The respect Barcelona players have for Guardiola, that is the respect these players have for our manager. And why wouldn’t you for a man who has given so much to this club?

But all this sugar coating will not work and its about time either our manager or his squad stand up and be frank. I just wish for one day, one day, I wake up in the morning and read that Arsene Wenger has blasted Arsenal over their performance. One day on which our manager comes out with a statement which has a bit of sting directed at his players.

One of the greatest managers in the world, Jose Mourinho, had the same situation with Inter when they lost to Atlanta 3-1. This is what he said :

That was our worst performance of the season, you could compare it with our match in Cyprus in the Champions League (a 3-3 draw at Anorthosis Famagusta),” said Mourinho.

“I can’t explain my team’s first half hour. When we lose I prefer to speak about how well the other team played but we played so badly in the first half that I prefer to say that we brought this result on ourselves.

“I will accept all the criticisms you want to direct at me. The press can use all the adjectives they want and I won’t complain.

His players are too soft and too goody-goody and irrespective of how they perform our manager backs them. It’s the usual ‘we didn’t play well’ but he shall never question his players. No wonder they get pushed around by teams like Stoke. You never see United, Chelsea or even Liverpool complain about Stoke, only Arsenal.

It’s a very despondent situation at Arsenal, that nobody can stand up and tell Wenger that “No, we should do it this way.” Nobody gives their opinions.

All the fancy football is good for some matches, but each match should be approached in a different manner, and if he does not do that what is the use of a manager?

Always standing up and fighting for his players is not a good thing because then they shall always feel that no matter how they perform, they can get away with it. They couldn’t care less, if this man gets stick from the media or the fans, so long as they are getting their wages and their sponsorships.

We saw what a furious Wenger can do to his team. He blasted them in the dressing room at half time at Anfield and they came out of the match as winners. Cesc and Vermaelen’s reaction to his anger was this:

“The boss screamed at us like I’ve never seen before, he was really disappointed in the first half and we were not at our best – that we didn’t deserve to wear the Arsenal shirt.

“We played like that, and I think that gave us a boost. I think he was right, we were not good in the first half, we were not up for it and in the second half we turned it around and I think we played one of the best second halves of the season.” Said Fabregas

“I’ve never seen him before like that. I think we just reacted very well,” said Vermaelen. “The first half was really bad on our side, second half, we put some pressure on them and you see the result.”

He over-protects his players when he should actually criticise them for certain performances. Days before what we witnessed at Stoke, the manager says :

We [have] conceded, I think, 21 from set-pieces and only 17 in open play. Less than anybody else in open play [but] we have been caught on set-pieces.

I mean it’s so f**king absurd. If a man has to make comments and then go and see his team concede goals like Arsenal did last week, its just crazy. This week he said:

The players have produced every single effort they could on the pitch, but maybe we were a bit too nervous when we had to cross the line.

Now imagine if he had said this :

The players have produced every single effort they could on the pitch, but maybe we were a bit too nervous when we had to cross the line. I am not happy with the current situation at the club and especially with some of the players in my squad because I felt they could have given much more to this team.

Now if you were a RVP or a Cesc or a Nasri, you would know that the boss means business because he has stated in public that he is not happy with the situation at the club and with some of your colleagues. Therefore impulsively you will try and do your best. On the other hand if you were a person like Diaby, or a Denilson or Rosicky, you know that you will not be able to take things so lightly as before because your career at Arsenal is at stake.

If the man gets a bit tough we can surely expect a change at Arsenal football Club. Players will know that they can’t afford to f*ck up because they are going to be scrutinised by their manager. Nobody is telling the man to go and blast every single performance of his players. But at least sometimes the manager should take the role of the “Bad Cop” and force this leverage out of his players.