Arsenal’s season could have been so different. Arsenal players were boldly predicting a clean sweep of trophies mid-way through the season, as they confidently strode close to that first spot and held a place in all three other competitions. By the end… 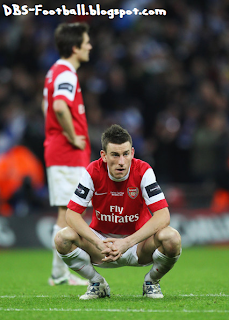 Arsenal’s season could have been so different. Arsenal players were boldly predicting a clean sweep of trophies mid-way through the season, as they confidently strode close to that first spot and held a place in all three other competitions. By the end of the season, Arsenal players are apologising to fans, with their heads firmly rooted in their hands after letting slip of a fantastic opportunity to repay the support and strife of trophy-less supporters.

It’s a bit like buying a lottery ticket. You get all excited that you may have a chance of winning millions of pounds, and you imagine what you’d buy when you win. You could turn from having a few hundred in the bank to a few million, and as the draw comes closer, you feel it is your time – your lucky day. Then, the next morning when you check your numbers, you discover the inevitable – you didn’t win a penny, and a huge sense of disappointment runs through you. The difference is, Arsenal’s season was not an inevitable failure. It looked set for success, but it all went wrong.

After defeating Barcelona in their Champions League first leg tie, everyone at Arsenal had that “lottery-ticket” feeling. They had overcome the odds and beaten a team often praised as the best in the world. Wenger was confident:

“We want to go for every single competition. How far will we go? I personally believe we can go in every competition to the end.”

Earlier in January, the club captain Cesc Fabregas had said after beating a battling Leeds side in their FA Cup replay:

“We want to go all the way in every competition.”

Only about four or five months later, and Wenger is contending with boos from his own fans, and players apologising for a dreadfully disappointing season. It really was a slippery slope of epic proportions. It tells a story when Arsenal’s ‘celebrity’ fan and avid Twitter user, Piers Morgan described his beloved Arsenal as “pathetic”, “gutless”, and a team who “don’t have the heart or guts to ever win the Premier League”.

Morgan may not be a very popular person, but his opinions are pretty much spot on. Those comments were made during just a game alone – Arsenal’s most recent loss at the hands of Aston Villa. Even the most unbelievably biased Arsenal supporter cannot defend Arsenal’s performances this season when it mattered.

Of course, luck plays a big part, and the various injuries throughout the season – most notably of Thomas Vermaelen, were a big blow, as well as the ludicrous decision to send Robin Van Persie off in the Champions League second leg with Barcelona. I’m sure there are other decisions that fans may think didn’t go their way, but those are the main ones, and truly are the worst of luck. But excuses for bad displays which are “gutless” and “pathetic” are invalid.

After saying that he believes Arsenal can win all four trophies this season back in February, Wenger added:

“It’s just down to how much we believe and how much commitment we show.”

We must assume then, that the belief and commitment to win a trophy simply wasn’t there.