Boss Brendan Rodgers confirmed on Thursday that attacker Philippe Coutinho is close to returning to action after recovering from shoulder surgery. The Brazilian is still short for this weekend but should be in contention to face Arsenal next week.

Daniel Agger is pushing for a recall and could replace Martin Skrtel in defence, but Jose Enrique is expected to miss out once again with a knock meaning Aly Cissokho should continue no the left.

There has been talk that Steven Gerrard may get a rest tomorrow but with the Reds not competing in the Capital One Cup next week, I can see Rodgers starting his captain against the Baggies.

Who will partner Gerrard in the center of midfield is the big question though with Lucas Leiva returning to the squad after missing last weeks 2-2 draw with Newcastle. Jordan Henderson and Joe Allen are also pushing for starts.

Who starts up front is a little easier to predict with the in-form duo of Luis Suarez and Daniel Sturridge expected to continue up front.

Here’s the eleven Rodgers may go for: 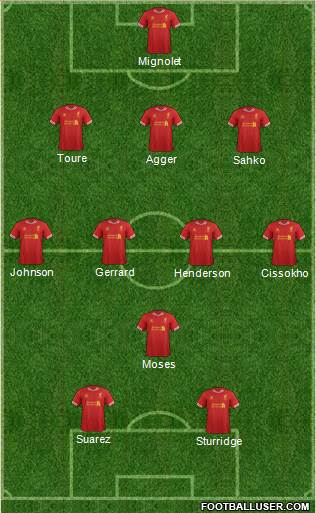