Liverpool entertain Cardiff City at Anfield for Saturday’s early kick off looking to move top of the Premier League. Here is the team Rodgers could go with:

Liverpool entertain Cardiff City at Anfield for Saturday’s early kick off looking to move top of the Premier League.

The Reds head into the game sitting second in the table – just two points behind leaders Arsenal – but with the Gunners not playing until Monday, the Merseysiders have the chance to leapfrog their rivals and move top of the standings.

Boss Brendan Rodgers has no new injury concerns but will have to continue to deal without the services of influential duo Steven Gerrard and Daniel Sturridge, with the pair remaining on the sidelines for the foreseeable future.

The goal-scoring burden will once again fall on striker Luis Suarez with the Uruguayan continuing his sensational form last week with a brace as well as setting up two others during Liverpool’s 5-0 thrashing of Tottenham.

Rodgers is unlikely to tinker too much from the site that started at White Hart Lane, with Raheem Sterling continuing in attack after an excellent goal-scoring display in the capital.

Jose Enrique is also still out so Jon Flanagan will remain at left-back with the youngster opening his account for the club with a well-taken strike against Spurs. Daniel Agger will be hoping for a recall but Mamadou Sakho is expected to retain his place alongside Martin Skrtel in defence.

Here is the team Rodgers could go with: 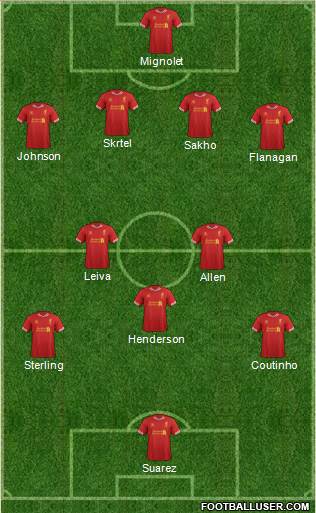