Suarez was slapped with a record ban by FIFA after being found guilty of biting Chiellini during the closing stages of Uruguay’s 1-0 win over Italy last week, with football’s governing body banning him from nine international fixtures as well as a four month ban from all football that will see him miss 13 games for Liverpool next season.

The Uruguay FA appealed the decision, insisting the striker had ‘lost his balance’ and ‘hit his face’ on the back of Chiellini, with the defence adamant that their was no biting or intent to bite.

However, it appears Suarez has made a swift u-turn with the 27-year-old taking to his official Twitter account this evening to issue a public apology. In the statement, which is also published on the players official website, Suarez admits Chiellini suffered a bite following their collision and vows an incident like this will never happen again.

“After several days of being home with my family, I have had the opportunity to regain my calm and reflect about the reality of what occurred during the Italy-Uruguay match on 24 June 2014.

“Independent from the fallout and the contradicting declarations that have surfaced during these past days, all of which have been without the intention of interfering with the good performance of my national team, the truth is that my colleague Giorgio Chiellini suffered the physical result of a bite in the collision he suffered with me.

“For this: 1. I deeply regret what occurred. 2. I apologize to Giorgio Chiellini and the entire football family. 3. I vow to the public that there will never again be another incident like this involving me.” 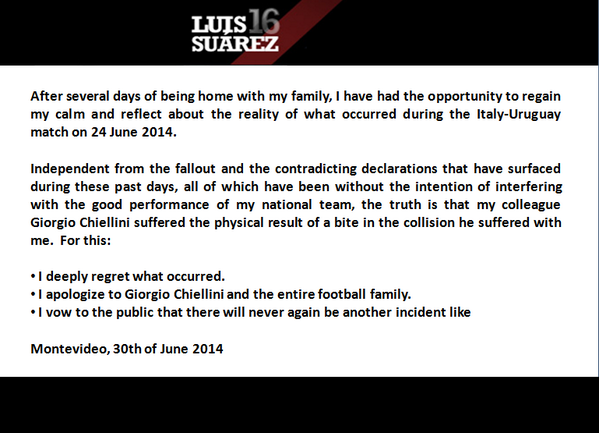 It will be interesting to see how the Uruguayan FA react to this as they have been fully supportive of the striker and adamant that he has done nothing wrong. Surely this apology completely undermines their appeal and it will have to be thrown out?

Liverpool fans have been split over whether now’s the right time to cash in on the striker, but it’s going to be interesting to see how things develop over the coming weeks and this apology could either persuade Liverpool to keep hold of him, or convince his suitors to step up their pursuit.