Liverpool have wrapped up their third signing of the summer with the £10m acquisition of Emre Can from Bayer Leverkusen, the club have confirmed this afternoon.

The summer transfer window is now open for business and it’s expected to be a busy few weeks as managers strengthen their squads ahead of next season, so we’ll bring you all the latest news and gossip. Today, Liverpool sign Emre Can.

Liverpool have wrapped up their third signing of the summer with the £10m acquisition of Emre Can from Bayer Leverkusen, the club have confirmed this afternoon.

The Reds put the deal in place for the 20-year-old last month but have only now officially completed the transfer after finalising all the necessary paperwork and getting international clearance, and the German youngster has penned a long-term contract at Anfield.

“I am proud to be a part of the family and I am looking forward to playing here. I will give it my best.

“LFC is a great club and the fans are amongst the best in the world. I am looking forward to the first game and can’t wait to step on the pitch for the first time at Anfield.”

Can is predominantly a central midfielder but is also capable of filing in at the back if needed, and he becomes the Merseysiders third signing following the arrivals of Rickie Lambert and Adam Lallana.

Although Liverpool haven’t disclosed the exact price they have paid Leverkusen, the Express and several other newspapers claim it’s in the region of £10million.

After sealing his move, Can was photoed in and around the clubs Melwood training ground, having a look in the gym and also posed with the Champions League trophy.

Check out a photo gallery of Can at Melwood courtesy of Liverpool’s official Twitter feed. 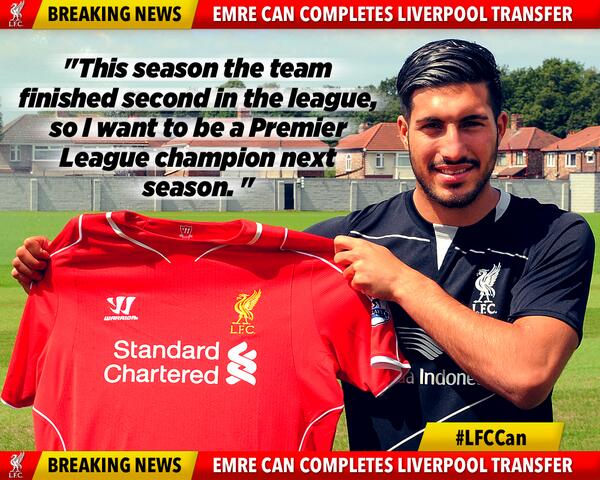