Tottenham take on high-flying Wolves at Molineux on Sunday afternoon. Here is the side we think Jose Mourinho will select for the game:

Tottenham take on high-flying Wolves at Molineux on Sunday afternoon. Here is the side we think Jose Mourinho will select for the game:

Goalkeeper: Tottenham will continue to be without Hugo Lloris as he remains on the sidelines with a dislocated elbow so Paulo Gazzaniga will continue in goal this weekend.

Defence: Mourinho is expected to make changes in defence with Jan Vertonghen returning at left-back. Ben Davies is out for the foreseeable future with an ankle injury so Vertonghen is set to come in for Danny Rose tomorrow.

Serge Aurier will replace Kyle Walker-Peters at right-back while Davinson Sanchez is expected to come in for Juan Foyth in the middle of the back four. Toby Alderweireld will be the only defender to keep his place from the side that lost to Bayern Munich in midweek.

Midfield: Tottenham have been handed a boost as Harry Winks is back in contention after recovering from an ankle injury that kept him out of the trip to Germany on Wednesday night and I expect he’ll be given a recall on Sunday.

Mourinho will want to keep things tight against a dangerous Wolves attack so Eric Dier is likely to keep his place in midfield with Moussa Sissoko the man to make way.  Tanguy Ndombele has been ruled out with a groin injury so Victor Wanyama could be on the bench.

Attack: Harry Kane was rested for the Champions League game in midweek so the England international is certain to be recalled to lead the line up front for Tottenham this weekend.

Ryan Sessegnon scored on his full debut against Bayern but the youngster is still expected to drop out tomorrow with Hueng-min Son returning to the left wing after he was named on the bench last time out.

Christian Eriksen and Giovani Lo Celso are set to drop back to the bench after failing to take their chance in midweek with Dele Alli recalled in the attacking midfield position and Lucas Moura moving to the right wing.

Erik Lamela remains on the sidelines with a thigh injury but Mourinho has plenty of options on the bench with the likes of Lo Celso, Sessegnon and Eriksen all among the substitutes. 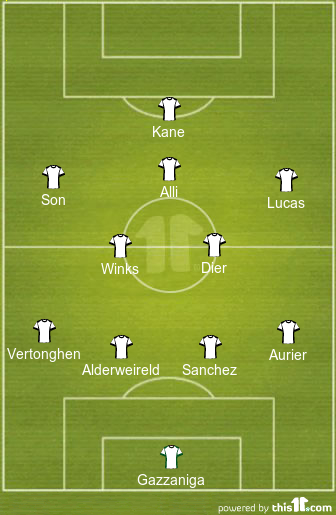