Manchester United take on Watford at Vicarage Road on Sunday afternoon. Here is the team we think Ole Gunnar Solskjaer will select for the game:

Manchester United will be looking to close-in on the top four with a win over Watford at Vicarage Road on Sunday afternoon. Here is the team we think Ole Gunnar Solskjaer will select for the game:

Goalkeeper: David De Gea is certain to be recalled after being rested during the League Cup win over Colchester in midweek. Sergio Romero will drop to the bench.

Defence: Solskjaer is also expected to make changes to the back four that started in the Carabao Cup. Aaron Wan-Bissaka should return at right-back while Victor Lindelof is also expected to be recalled with Ashley Young and Axel Tuanzebe making way.

Harry Maguire should keep his place in the middle of the United back four while Luke Shaw appears to be ahead of Brandon Williams in Solskjaer’s pecking order at left-back.

Midfield: United will continue to be without Paul Pogba this weekend. The Frenchman suffered a set-back in his recovery from an ankle injury after falling ill last weekend. He’s now back in full training but is still lacking match fitness so the trip to Watford will come too soon.

Solskjaer is expected to make changes in midfield as Scott McTominay will be recalled after being rested in midweek while Fred should join the Scottish international in the middle of the park.

Nemanja Matic and Andreas Pereira will drop out to compete with youngster James Garner for a place on the Man Utd substitutes bench on Sunday afternoon.

Attack: Man Utd will make a changes in attack as Daniel James is due a recall after being given a breather in midweek while Jesse Lingard is also expected to come back into the starting eleven.

Juan Mata will drop out while Mason Greenwood may also miss out despite putting in some excellent performances in recent games as Marcus Rashford and Anthony Martial should keep their places in the front-line. 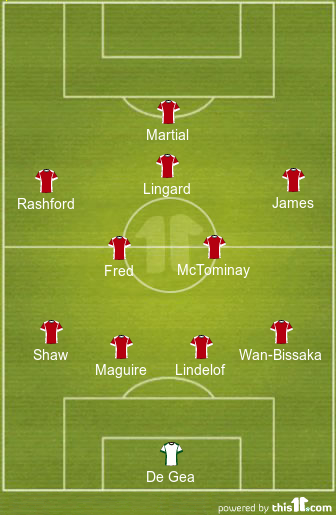