Liverpool take on Flamengo in the World Club Cup final this evening. Here is the team we expect Jurgen Klopp to select for the game:

Liverpool take on Flamengo in the World Club Cup final this evening. Here is the team we expect Jurgen Klopp to select for the game:

Goalkeeper: There is no point deliberating over who’ll start in goal as Alisson Becker will keep his place between the sticks after another excellent display in the semi’s so Adrian will have to settle for a place on the bench.

Defence: Virgil van Dijk is expected to be passed fit to start the game after missing the win over Monterrey through illness. Dejan Lovren remains out with a thigh injury while Joel Matip is still working his way back to full fitness from a knee problem so Joe Gomez will get another start at centre-back.

Trent Alexander-Arnold is set for a recall at right-back after being rested in midweek while Andy Robertson should keep his place on the opposite side of the Liverpool back four.

Midfield: With Van Dijk set to return, Jordan Henderson is expected to move back into midfield after filling-in at the back against Monterrey. Adam Lallana started in the holding role last time out but he’s set to drop back to the bench tonight.

James Milner could also move into midfield after starting at right-back on Wednesday night. Klopp will have to decide whether to drop Alex Oxlade-Chamberlain or Naby Keita but I have a feeling the Guinean international will keep his place in the middle of the park.

Gini Wijnaldum remains unavailable with a minor knock so he won’t be involved against Flamengo this evening.

Attack: Liverpool will make changes in attack as Sadio Mane and Roberto Firmino are set for recalls after being rested in the semi-finals. Mohamed Salah is likely to keep his place with the Reds starting their best front three.

Therefore, Xherdan Shaqiri and Divock Origi are expected to drop back to the bench after starting against Monterrey but they’ll be very useful options for Klopp to have if needed. 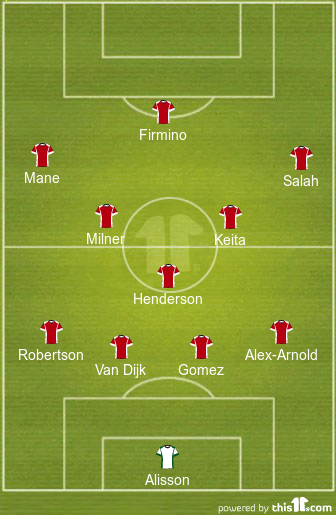