Liverpool take on Wolves at Anfield on Sunday afternoon. Here is the team we expect Jurgen Klopp to select for the game:

Liverpool will look to tighten their grip at the top of the table with a win over Wolves at Anfield on Sunday afternoon. Here is the team we expect Jurgen Klopp to select for the game:

Goalkeeper: There is no point deliberating for too long over who’ll start in goal as Alisson Becker is certain to keep his place between the sticks.

Defence: Liverpool are stretched in the middle of defence as Joel Matip and Dejan Lovren remain on the sidelines through injury so Joe Gomez is expected to continue alongside Virgil van Dijk in the middle of the back four tomorrow.

Klopp will need to manage his squad during this busy period but I think he’ll keep Trent Alexander-Arnold and Andy Robertson in the side against Wolves with one of them probably rested against Sheffield United on Thursday.

Midfield: Liverpool skipper Jordan Henderson picked up a minor shin injury against Leicester on Boxing Day so he might not be risked from the start. Adam Lallana is an option but I think we’ll see James Milner recalled tomorrow.

Fabinho and Alex Oxlade-Chamberlain remain out through injury so we should see Naby Keita and Gini Wijnaldum keeping their places in the Liverpool midfield against Wolves.

Attack: Liverpool were rampant during the win at Leicester last time out but I think Klopp may be tempted to rest one of his front three tomorrow in order to keep them fresh.

Roberto Firmino was excellent at the King Power so I feel he’ll keep his place up front while Sadio Mane is likely to start on the left side of the attack. Therefore, Mohamed Salah could be the man to get a rest.

Divock Origi is pushing for a recall but I wouldn’t be surprised if it’s Xherdan Shaqiri who’s brought in to replace Salah with Origi having to settle for a place on the bench. 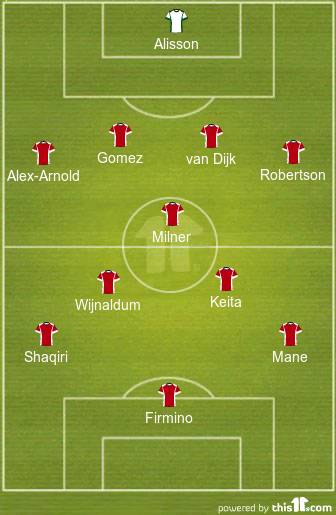