Tottenham take on Middlesbrough at the Riverside in the 3rd round of the FA Cup on Sunday. Here is the side we think Jose Mourinho will select

Tottenham take on Middlesbrough at the Riverside in the third round of the FA Cup on Sunday afternoon. Here is the side we think Jose Mourinho will select for the game:

Goalkeeper: Tottenham will continue to be without Hugo Lloris due to injury so Mourinho might give Paulo Gazzaniga a rest with Michel Vorm coming in between the sticks.

Defence: Mourinho is expected to make changes after a busy festive period but Ben Davies remains out with an ankle injury while Danny Rose is also still on the sidelines so Ryan Sessegnon could continue at left-back.

Kyle Walker-Peters has returned to training following a calf problem so he could come in for Serge Aurier at right-back while Juan Foyth and Davinson Sanchez are expected to get recalls in defence with Jan Vertonghen and Toby Alderweireld rested.

Midfield: Tottenham will be boosted by the return of Eric Dier after he missed the defeat to Southampton with illness and he could be given a recall in the middle of the park against Middlesbrough with Moussa Sissoko making way.

Tanguy Ndombele has been ruled out with a groin injury that he picked up at St Mary’s so Harry Winks is likely to come in alongside Dier while Giovani Lo Celso should replace Christian Eriksen.

Attack: Harry Kane is facing a lengthy spell on the sidelines after suffering a hamstring injury against Southampton and Mourinho has suggested teenage striker Troy Parrott isn’t ready to fill his boots just yet.

Therefore, we could see Hueng-min Son deployed in a forward role as he’s set to come back into contention having served a three-game suspension. Lucas Moura is another option up front for Tottenham but I think we’ll see him starting from the wing this weekend.

Erik Lamela could be given a recall with Dele Alli rested while youngsters Oliver Skipp and Japhet Tanganga should be involved at some point. 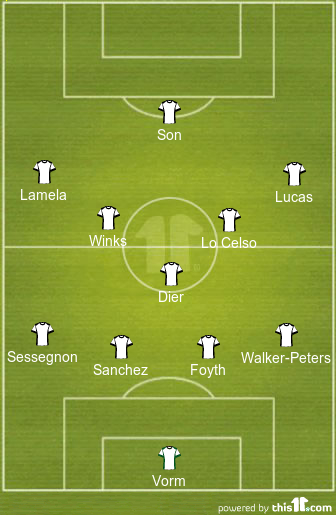