Tottenham take on Norwich City at the New White Hart Lane on Wednesday night. Here is the side we think Jose Mourinho will select for the game:

Tottenham take on Norwich City at the New White Hart Lane on Wednesday night. Here is the side we think Jose Mourinho will select for the game:

Goalkeeper: Hugo Lloris returned to full training last week after recovering from an elbow injury, however, he’s still not match fit so Paulo Gazzaniga is expected to continue between the sticks for Tottenham.

Defence: Mourinho went with a back four during the 0-0 draw with Watford at the weekend and he’s likely to stick with that formation. Davinson Sanchez is pushing for a recall but I think he’ll have to settle for a place on the bench once again as Jan Vertonghen and Toby Alderweireld should keep their places in the middle of the back four.

Mourinho has played down reports suggesting he was involved in a bust-up with Danny Rose at the weekend after the full-back was axed for the trip to Watford but Rose isn’t expected to feature tomorrow night.

Youngster Japhet Tanganga did a solid job at left-back at Vicarage Road on Saturday so I think he’ll keep his place against Norwich with Serge Aurier once again at right-back.

Midfield: Tottenham have been handed a boost as Tanguy Ndombele is back in contention after returning to full training following a hip injury that’s hampered in recently so the Frenchman could be given a recall tomorrow.

However, Moussa Sissoko remains on the sidelines following knee surgery so Harry Winks is likely to keep his place in the middle of the park meaning Eric Dier may have to settle for a place on the bench.

Christian Eriksen could be pushed into a more advanced role if Ndombele returns but Giovani Lo Celso may be named among the substitutes again.

Attack: Tottenham may freshen things up in attack with Dele Alli moved out to the left to accommodate Eriksen in the central advanced attacking midfield role.

Harry Kane is obviously still unavailable as he’s facing a race against time to play again this season after tearing his hamstring so Lucas Moura is likely to continue up front as Mourinho is still trying to bring in a new striker this month.

Heung-min Son may start from the right-wing with Erik Lamela making way but the Argentinean will be a useful substitute to have if needed. New signing Gedson Fernandes will also be another option for Tottenham on the bench. 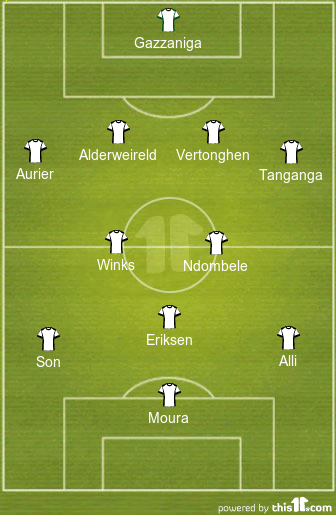