Tottenham take on Manchester City at the New White Hart Lane on Sunday afternoon. Here is the side we think Jose Mourinho will select for the game:

Tottenham take on Manchester City at the New White Hart Lane on Sunday afternoon. Here is the side we think Jose Mourinho will select for the game:

Goalkeeper: Hugo Lloris has made a successful return from injury so the Frenchman should keep his place in goal with Paulo Gazzaniga on the bench tomorrow.

Defence: Mourinho could make just one change from the back four that started during the 1-1 draw with Southampton in the FA Cup  last weekend with Jan Vertonghen pushing for a recall. Toby Alderweireld is expected to keep his place so Davinson Sanchez is the man most likely to make way.

Danny Rose completed a deadline day move to Newcastle and Ben Davies is still working his way back to fitness from an ankle injury so Japhet Tanganga could continue at left-back.

Kyle Walker-Peters joined Southampton on deadline day so Serge Aurier doesn’t have too much competition at right-back as Juan Foyth appears to be out of favour under Mourinho.

Midfield: Tanguy Ndombele is back in contention for Tottenham and the Frenchman could be recalled in midfield against Man City tomorrow. Gedson Fernandes may find himself on the bench after struggling at St Mary’s last weekend.

Harry Winks is expected to retain his place in the middle of the park. Eric Dier may have to settle for a place on the bench while Moussa Sissoko remains on the sidelines following knee surgery.

Attack: Tottenham failed in their efforts to sign another striker in January so Mourinho is going to have to battle on with limited options until Harry Kane returns from a serious hamstring injury in a couple of months.

Lucas Moura is expected to keep his place in attack while Hueng-min Son should also start once again for Spurs tomorrow afternoon. Dele Alli has seen his form dip lately but I still think he’ll start against City.

Christian Eriksen completed a move to Inter Milan on deadline day but Giovani Lo Celso is finding his form so Tottenham already have their replacement and I think he’ll start this weekend following some terrific displays recently.

Tottenham did sign Steven Bergwijn from PSV last week and the Dutch international will be in the squad against Man City. However, I think he’ll probably have to settle for a place on the bench alongside Erik Lamela and Ryan Sessegnon. 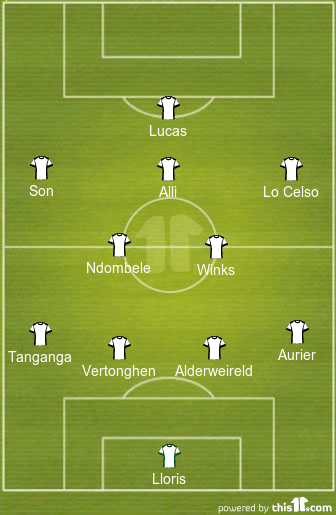