Tottenham take on Burnley at Turf Moor on Saturday evening. Here is the side we think Jose Mourinho will select for the game:

Tottenham take on Burnley at Turf Moor on Saturday evening. Here is the side we think Jose Mourinho will select for the game:

Goalkeeper: Spurs have been handed a boost as Mourinho says Hugo Lloris is expected to be back in contention after missing the last two games with a groin issue. Michel Vorm is set to drop out of the squad with Paulo Gazzaniga on the bench.

Defence: Tottenham are being tipped to deploy a back four tomorrow with Toby Alderweireld in-line for a recall after being named on the bench for the last two matches. Eric Dier could move into midfield to accommodate Alderweireld’s return with Davinson Sanchez keeping his place in the middle of defence.

Jan Vertonghen and Serge Aurier gave a lot during the FA Cup penalty shoot-out defeat to Norwich in midweek so I expect both to be given a breather against Burnley. Ben Davies is set to return at left-back while Japhet Tanganga could start on the right.

Midfield: Harry Winks is expected to keep his place in the Spurs midfield this weekend while Dier could start alongside him as his versatility would allow Mourinho to switch to a back three during the game if needed.

Dier is under investigation after launching himself into the crowd to protect his brother from an abusive fan following Tottenham’s cup exit on Wednesday night but Mourinho says he’s still available for selection this weekend.

Tanguy Ndombele made his return from injury with a substitute appearance against Norwich but I think he’ll have to settle for a place on the bench again while Oliver Skipp may drop out despite impressing in midweek.

Mourinho has hinted Giovani Lo Celso may need a rest after saying the midfielder was ‘dead’ after Tottenham’s defeat to Norwich so Gedson Fernandes could be recalled to start against Burnley. However,  Moussa Sissoko is still working his way back to full fitness from a knee injury so he’s not available tomorrow evening.

Attack: Tottenham could freshen things up a little in attack as Mourinho is concerned his forwards will burn out due to a lack of options in the final third right now with Harry Kane and Heung-min Son still injured.

Lucas Moura has played a lot of football lately so he may be given a rest with Erik Lamela back in contention after making an appearance off the bench against Norwich having overcome a muscle issue.

Steven Bergwijn could keep his place in the Tottenham attack as Mourinho appears reluctant to hand teenager Troy Parrott a start. Ryan Sessegnon is close to making his return from injury but he might not be ready to face Burnley so Dele Alli may once again start in the front three. 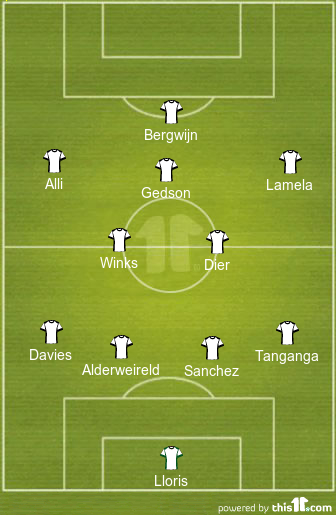