Manchester United take on Sheffield United at Old Trafford on Wednesday evening. Here is the line-up we think Ole Gunnar Solskjaer will select for the game:

Goalkeeper: David De Gea has come under fresh scrutiny following his error for the Tottenham goal on Friday night but Solskjaer came out and backed his number one today so I expect the Spaniard to retain his place tomorrow night.

Defence: Victor Lindelof was forced off during the 1-1 draw in north London last week after picking up a knock. Solskjaer appeared to confirm the injury wasn’t serious at his press conference today but the Man Utd boss may still not risk the Swedish international tomorrow.

Eric Bailly is the man set for a recall if Lindelof doesn’t start as Phil Jones and Axel Tuanzebe are out injured. Harry Maguire was also at fault for the Spurs goal but he should keep his place in the middle of the back four.

Aaron Wan-Bissaka is expected to retain his position ahead of Diogo Dalot at right-back while Luke Shaw should start on the left meaning Brandon Williams may have to settle for a place among the substitutes once again.

Midfield: Manchester United are expected to make one key change in midfield as Paul Pogba is set for a recall after making a huge impact off the bench on Friday night. The Frenchman won the penalty for the equalising goal and looked in excellent form so he should start tomorrow.

Who makes way will be a tough decision for Solskjaer. Scott McTominay is likely to keep his place in the deeper role and he’ll be looking to celebrate signing his new contract with a win over Sheffield United.

Bruno Fernandes is also expected to start as he’s become an important player for United since arriving in January so Fred may be the unlucky man to drop out for Pogba tomorrow night. Nemanja Matic is also likely to start on the bench.

Attack: Marcus Rashford came through the Tottenham game unscathed after recovering from a back injury so he should keep his place in the Man Utd attack while Anthony Martial is likely to start once again.

Daniel James got the nod against Spurs but I wouldn’t be surprised to see Mason Greenwood given a chance to impress from the right wing. Juan Mata and Jesse Lingard will likely join Odoin Ighalo on the bench. 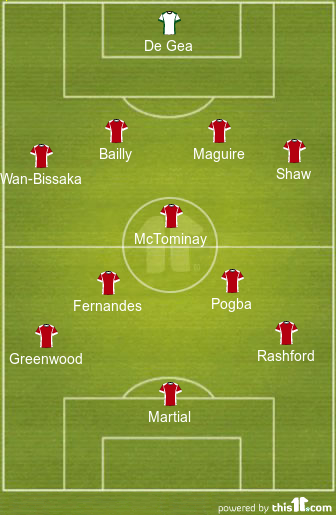