Matteo Guendouzi could be recalled when Arsenal take on Sheffield United

Arsenal take on Sheffield United in the quarter-finals of the FA Cup at Bramall Lane on Sunday afternoon. Here is the team Gooner Mac expects Mikel Arteta to select:

Goalkeeper: Bernd Leno continues to recover from a knee injury that will keep him out for up to six weeks. Emi Martinez produced a solid performance against Southampton on Thursday evening so he’ll be looking to build on that display this weekend.

Defence: David Luiz returns after serving a two-match suspension. Shkodran Mustafi has played the full ninety minutes in each of Arsenal’s last three games since the restart so he could be given a rest with Luiz recalled.

Rob Holding was excellent against Southampton so I think he’ll be given another chance to impress which means Sokratis – who’s just recovered from a thigh injury – will have to settle for a place on the bench again.

Hector Bellerin is struggling to hit top form but he may continue at right-back as this game should come too soon for Cedric Soares after he recently returned to full training following nose surgery.

Kieran Tierney limped off against Southampton but Arsenal have confirmed it was just cramp. However, the Scot is unlikely to be risked against Sheffield United so Sead Kolasinac is set for a recall at left-back.

Midfield: Granit Xhaka made a successful return to action on Thursday following a minor ankle problem and he should keep his place in the middle of the park as Arsenal are certainly a better side when he’s playing right now.

Matteo Guendouzi was axed from the squad for the trip to Southampton but I think the youngster will be given a recall on Sunday. Arteta was just teaching him a lesson and we’re not blessed with too many options in midfield so I wouldn’t be surprised to see Guendouzi start against the Blades.

Dani Ceballos is the man most likely to make way as he put-in another disappointing performance at St Mary’s. Bukayo Saka has been one of Arsenal’s best players this season and he deserves to keep his place – although we may see him in a more central role again.

Lucas Torreira is hoping to resume full training next week after recovering from an ankle ligament injury but this game comes too soon so he’ll miss the trip to Bramall Lane on Sunday afternoon.

Attack: Mesut Ozil has still not played a single minute since the restart so he’s highly unlikely to start against Sheffield United while Joe Willock may also have to settle for a place on the bench despite scoring Arsenal’s second goal against Southampton.

Nicolas Pepe was hugely disappointing last time out so I wouldn’t be surprised to see him dropped this weekend. Gabriel Martinelli has been ruled out for the rest of the season with a knee injury so Reiss Nelson could come in on the right wing.

Pierre-Emerick Aubameyang should continue from the left while Alexandre Lacazette could be recalled up front with Eddie Nketiah making way as they’ve been rotated since the restart. 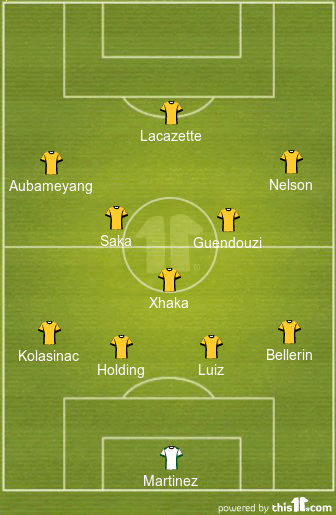