Manchester United take on West Ham at Old Trafford on Wednesday evening. Here is the line-up we think Ole Gunnar Solskjaer will select for the game:

Goalkeeper: David De Gea is under the spotlight once again following his poor showing in the FA Cup semi-final defeat to Chelsea. Reports suggest the Spaniard’s position is under threat from Sergio Romero but I think we’ll still see Solskjaer stick with his number one against West Ham.

Defence: United deployed a back three against Chelsea on Sunday but I think we’ll see Solskjaer revert to his favoured back four with Aaron Wan-Bissaka starting at right-back and Victor Lindelof keeping his place at centre-back.

Harry Maguire has been passed fit to start despite picking up a head injury during a clash with Eric Bailly at the weekend but the Ivorian is set to miss out after being stretchered off following the nasty collision.

Luke Shaw has been forced to miss Man Utd’s last two matches due to an ankle injury and he remains a doubt for tomorrow’s game. Therefore, Brandon Williams could continue at left-back if Shaw misses out again.

Midfield: Manchester United are expected to make a key change in midfield as Paul Pogba will be recalled after being rested for the FA Cup semi-final on Sunday so Fred should drop to the bench.

Nemanja Matic is likely to keep his place in the middle of the park so Scott McTominay may have to make-do with a place among the substitutes against West Ham.

Bruno Fernandes scored a late consolation from the penalty spot during Man Utd’s defeat to Chelsea and the Portuguese international should once again start in the attacking midfield position tomorrow night.

Attack: Mason Greenwood was given a breather at the weekend so the youngster should be recalled to start on the right side of the United attack on Wednesday evening.

Marcus Rashford should keep his place on the opposite flank while Anthony Martial is expected to be recalled up front after being named on the bench against Chelsea last time out.

Daniel James will be the man to drop out but he’ll be an option for Solskjaer from the bench along with the likes of Odion Ighalo, Juan Mata and Jesse Lingard. 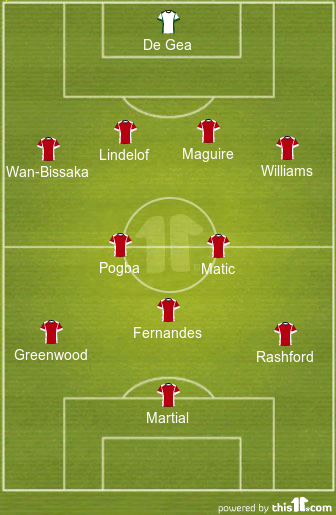