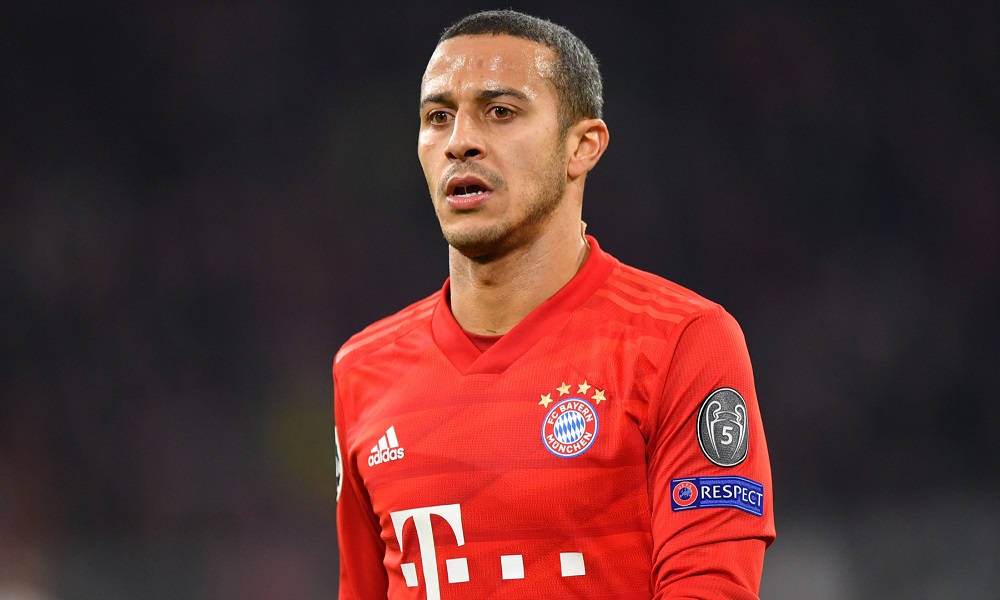 Manchester United are in talks with Thiago Alcantara’s agent about a possible move but the £29m-rated Bayern Munich midfielder wants to join Liverpool, according to reports.

Thiago is a product of Barcelona’s famed La Masia youth academy but he’s made his name as one of the best midfield playmakers in European football during his seven-year spell at the Allianz Arena.

The 29-year-old has excelled during his time in Germany and put-in another superb performance to help Bayern Munich win the Champions League with a 1-0 victory over Paris Saint-Germain last month.

However, Thiago is set to leave the Bundesliga champions as he has just one year left on his contract and has informed Bayern Munich chiefs he won’t be signing an extension as he wants a new challenge abroad.

Bayern don’t want to risk losing the Spanish international for nothing in 12 months time so they are ready to cash-in this summer and the Daily Mail says Munich have set the asking price at £29m.

The situation has led to widespread speculation linking Thiago with a move to Liverpool but it looks as though the Premier League champions have competition as the Daily Mail are citing a report from Bild that claims Man Utd have held talks with the players agent.

Ole Gunnar Solskjaer is trying to build a squad capable of competing for major honours this season and United are reportedly on the verge of signing Dutch midfielder Donny van de Beek from Ajax but it appears they are still showing an interest in landing Thiago.

However, the Red Devils may have their work cut out trying to persuade the former Barca star to head to Old Trafford as RMC Sport journalist Mohamed Bouhafsi claims Thiago is only interested in joining Liverpool.

Bouhafsi says Jurgen Klopp has held talks with the midfielder and Thiago has already prepared himself for a move to the Premier League champions in England, but talks between the two clubs are expected to drag.

His only choice is #Liverpool. #Klopp and #Alcantara have already discussed. Alcantara has already prepared his arrival in England. Problem: Bayern know it and discussions with Liverpool are long.

Liverpool have so far refused to meet Bayern’s asking price but if Klopp manages to offload Georginio Wijnaldum then that would free-up a space for Thiago and generate funds for any potential deal.

Wijnaldum is being strongly linked with a move to the Nou Camp as he has just one year left on his deal and is yet to agree terms over an extension. Therefore, Liverpool could be ready to cash-in on the Dutchman and use the money to land Thiago.

We’ll have to wait and see how things develop over the coming days but there is no doubt Thiago would be a superb signing for Liverpool or United if either club could get a deal agreed for his signature.