Manchester United take on Newcastle United at St James’ Park on Saturday night. Here is the line-up we think Ole Gunnar Solskjaer will select for the game:

Goalkeeper: David De Gea conceded six goals during United’s humiliating defeat to Tottenham before the international break but the Spaniard is still expected to keep the gloves ahead of Dean Henderson tomorrow.

Defence: Solskjaer will be demanding a response from his players following their 6-1 loss to Spurs but the Man Utd boss will need to make a late check on one of his key defenders as Harry Maguire is a slight doubt.

Solskjaer revealed at his pre-match press conference today that Maguire would need to be assessed at training after picking up a knock shortly before being sent off for England in midweek. However, the centre-back is keen to play and the issue isn’t serious so Maguire is expected to start against Newcastle.

Eric Bailly also picked up a knock while away with the Ivory Coast and although that problem isn’t thought to be serious either, Victor Lindelof could be recalled to start this weekend.

Aaron Wan-Bissaka should keep his place at right-back while Luke Shaw may also start at left-back. Alex Telles has only had one training session since returning from international duty with Brazil so he’s unlikely to make his full debut tomorrow.

Midfield: Manchester United looked weak in midfield against Tottenham so Solskjaer might freshen things up with Scott McTominay coming in for Nemanja Matic in the middle of the park.

Paul Pogba has endured a slow start to the season so he’ll be looking to put-in an improved performance tomorrow as the Frenchman should keep his place with Fred having to make-do with a place on the bench.

Bruno Fernandes is also expected to keep his place in the attacking midfield position so Donny van de Beek may have to settle for a substitutes role once again this weekend.

Attack: Anthony Martial is suspended following his dismissal against Spurs so Solskjaer has to make at least one change in the Man Utd attack but Edinson Cavani isn’t available as he’s still in quarantine following his deadline day move.

Odion Ighalo is an option but we think Solskjaer will play Mason Greenwood through the middle with Juan Mata possibly getting the nod to come in on the right ahead of Daniel James and Jesse Lingard. Marcus Rashford should keep his place on the left side of the United attack. 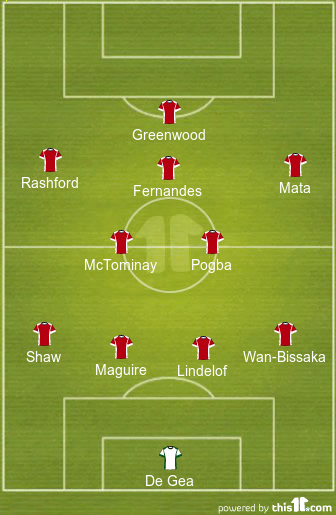