Manchester United welcome RB Leipzig to Old Trafford on Wednesday night. Here is the line-up we think Ole Gunnar Solskjaer will select for the game:

Goalkeeper: David De Gea was excellent against Paris Saint-Germain last week and kept a clean sheet against Chelsea at the weekend so he’s almost certain to retain the gloves ahead of Dean Henderson tomorrow.

Defence: Man Utd played a back four on Saturday but the back three system worked to perfection against PSG in the Champions League so it wouldn’t be a surprise to see Solskjaer reverting to that shape versus Leipzig.

Axel Tuanzebe could be recalled to the starting eleven as he was outstanding in Paris so the youngster may come in to line-up alongside Harry Maguire and Victor Lindelof after being rested for the Chelsea game.

Luke Shaw would therefore be the man to make way if Tuanzebe is recalled but Eric Bailly remains on the sidelines after being ruled out for at least three weeks.

Midfield: Manchester United have gone with Scott McTominay and Fred in the middle of the park for the last two games and they’ve performed well but Solskjaer may want to freshen things up tomorrow night.

Paul Pogba is pushing for a recall after being on the bench for the last three games so the Frenchman could come back in to partner McTominay with Fred dropping to the bench. Nemanja Matic is another option in midfield but he may have to settle for a place among the substitutes again.

We could see Alex Telles come in at left wing-back after his impressive display against PSG. The Brazilian wasn’t involved against Chelsea so should be fresh. Aaron Wan-Bissaka is expected to retain his place on the opposite flank.

Bruno Fernandes is set to keep his place in the attacking midfield position so Donny van de Beek will have to make-do with a place on the bench once again as his frustrating start to life at Man Utd continues.

Attack: Anthony Martial is back in contention after being suspended at the weekend and the French international is expected to start up front against Leipzig at Old Trafford.

Marcus Rashford is favourite to partner Martial so Edinson Cavani will be a striking option from the bench after making his debut against Chelsea at the weekend.

Mason Greenwood will also be among the subs along with Daniel James, Odion Ighalo and Juan Mata so Solskjaer has plenty of attacking options at his disposal. 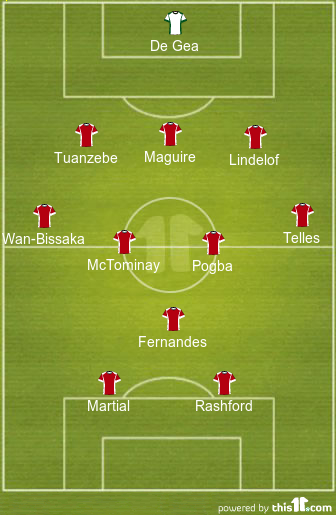